The yard at Denver's Burnham shops have seen more than a few engines these days as Union Pacific held an auction of more than 50 units on July 14, 2010. Earlier in the month,  a request came in from the Colorado Railroad Museum. Would it be possible, they asked, for UP to donate unit UP 9871?  Within hours, UP said yes!

A vintage 1980 former-Denver & Rio Grande Western  diesel-electric "Tunnel Motor" is no small favor! These locomotives were the premier, heavy-diesel power for the Class 1 D&RGW railroad, representing the ultimate in locomotive development. They were among the last new locos purchased by the Rio Grande. The locomotive is over 70 ft. long and weighs nearly 350,000 lbs.

The museum already has a diesel from the Rio Grande, the 5771. Actually, they have three.  The 5771 has a sister behind her, #5762. Additionally, there is a GP-30, DRGW 3011 sitting behind the roundhouse awaiting funds for restoration.

Nonetheless, the museum is thrilled. "This is a significant addition to the collection of Museum locomotives," said Donald Tallman, Executive Director of the Colorado Railroad Museum. " The Museum now has among the first [in the 1881-built steam engine #346] and last of the D&RGW locomotives that worked in Colorado."

Indeed, the Colorado Railroad Museum now has quite the ultimate in Rio Grande motive power.

Steam Rio Grande On the Grounds
Diesel Rio Grande On the Property
And now we add...
5401 SD40T-2 - Main Line Thru the Rockies power, built for growling up the grades to near timberline and then back down with dynamic brakes and retainers. Accordingg to both James Griffin and UtahRails.net, the unit was renumbered (patched) to UP 8594 on June 30, 2005. Further, according to Kevin Morgan, intrepid photographer, UP 8594 was renumbered again to UP 9871 on June 1, 2007. Two patchings and no painting by the boys in Armour Yellow, we should count ourselves lucky, right?

Not so fast. Unfortunately, while Kevin managed to catch the tunnel motor from this angle, 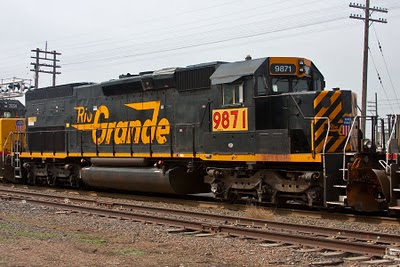 He was also able to catch it from the reverse angle, which reveals a heinous spate of graffiti. 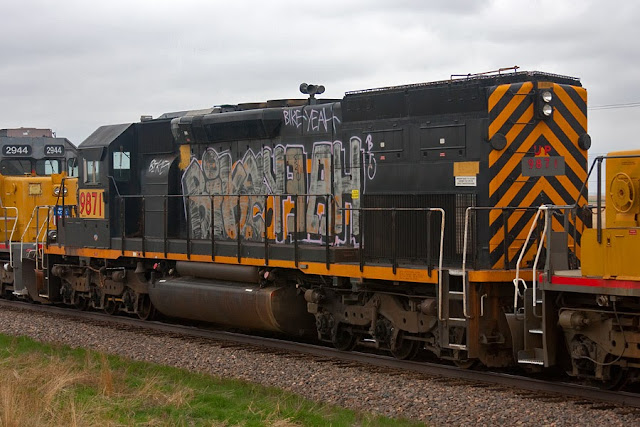 Fortunately, he managed to catch 5401 in happier times. So was Nathan Holmes on DRGW.net.  Not to be left out, these people did too. Still, did the Museum folks know about the "unofficial" paint job on the conductor's side?

"Yes indeed," Donald Tallman told me in an e-mail yesterday. "However, it was more originally intact than the other unit we were considering."

And, after all, it's just paint. Keeping everything intact is most important to a museum. Paint is easy to match, buy and apply. A specialized piece of equipment or one that's prone to theft is not so easy to redo.

With the donation, what will happen to the engine while the museum raises the funds to move it to the property? Tallman said, "The BNSF has agreed to transport the locomotive to MillerCoors, where it will be stored temporarily until a suitable display track can be built and the Museum can find the funding to move it to the site."

Tallman added that if someone would like to make a donation to this project, contact donald@crrm.org.
Dispatcher: Steve Departure Time: 23:52