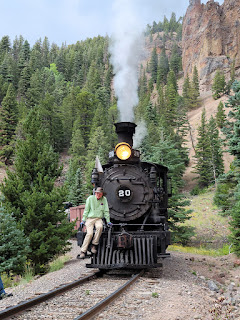 This is a post I'd rather not write. I will keep it brief.

Perhaps one of the greatest friends to the railroads of Colorado, indeed certainly to live outside of the state and within the last 30 years, has passed on March 30, 2022. Jim Wrinn, for 17 years Editor of Trains Magazine, had a long battle with pancreatic cancer before it stole him from our midst. I wish I could say this is the only friend I've lost to the monster, but I can't. It has the highest mortality rate of all the cancers, with a 5-year survival rate of just 11%, or 9 out of 10 diagnosed die within 5 years.

Yes we all die. Yes, I believe that something wondrous and glorious awaits only some of us. I believe I will see him again. That doesn't take away the pain of goodbye. And certainly not someone who was generous with his time and energy to someone like me. We weren't that close, but he made me feel a part of his world, and that counts for a lot for someone disabled.

Jim was no stranger to the Antonito, to Durango, to Denver, or many of the points around and between. He realized a hope at the Victorian Iron Horse Roundup (archive) by re-enacting a shot from Trains' long past covers only last year (above). Had COVID delayed it again, he wouldn't have lived to see it. I am personally gratified it did not and he did.

His obituary at Trains contains the following quote of Fred W. Frailey:

“Every writer wants an editor, a boss, who says yes, . . . Forget what ‘yes’ means — it can mean anything. Jim Wrinn always said ‘yes,’ even when it was no because he made it seem like yes. I love the guy.”