With no Bronco game :-[ this Labor Day weekend, there's more than enough time to take in a movie or an extra show. A few years ago, History channel turned out an episode about "Freight Trains." Although one or two minor errors slipped by--that I could tell, anyway--the 45 minute documentary does a more than passable job in explaining the basics of steam piston valves, diesel engine construction, freight cars, yards, and virtually every other aspect of modern railroading in America, including the demise of steam and FRED's elimination of the caboose. While there is nothing that ties into Colorado directly, there is plenty to keep even the casual viewer interested.


It was good to see Jim Boyd, former editor of Railfan & Railroad magazine and an accomplished author make an appearance in the episode. He was a great asset to railfans everywhere. He will be sorely missed.◊ 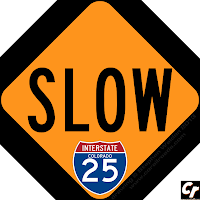 While trolley supporters up in Denver view their preserved trolley car this weekend, trolley supporters in Colorado Springs are fighting desperately to save the stub end of the Rock Island Railroad for future use as a commuter line, but short-sighted city officials just see an eyesore and a source of scrap iron revenue they could step in and steal.

Claude Wiatrowski, Springs resident and author of Railroads of Colorado and Railroads Across North America wrote in a comment on the Gazette article,


This is part of the Rock Island railroad that once ran between downtown Colorado Springs and Chicago. Recently, the tracks have been intact as far as Limon. I think it is very short sighted that they were not saved at least as far as Falcon. With all the residential development in the Falcon area, this would have made the perfect commuter rail line, connecting a developing residential area to downtown. Instead we will add yet more lanes to Woodmen or Constitution.

Indeed it would make the perfect commuter line! The entire north and east sides of Colorado Springs residents would benefit. Instead of routing traffic to US 24 and forcing more commuters to sit in their cars and travel a longer route, Colorado Springs could keep this line and implement light rail or commuter rail at a fraction of what Denver would have to pay for right-of-way acquisition. What are the civic leaders of Colorado Springs thinking? Is it really time to eat the seed you saved for planting?

If we have to take up the tracks, stockpile them at the Springs Trolley museum for protection and eventual restoration. Then pass city legislation preserving the entirety of the route for future transit. If Colorado Springs truly wants a good future, it's elected leaders shall preserve and protect it today.◊

This Weekend, History of Denver's Transit Past At Fed Center

This weekend, folks near the Denver Federal Center in Lakewood have an annual opportunity to connect with other railroads and a unique part of history. Lee Ryan explains:


Saturday, August 10th is the once a year roll-out for Denver & Intermountain R.R. Co. Interurban trolley #25 and I will be on board as an operator throughout the day.

This Interurban trolley was built in Denver, CO in 1911 by the Woeber Carriage Co. Being an Interurban trolley it had a top speed of 70mph. It is the only original Denver trolley lo still in existence. It was pulled out of the Colorado Railroad Museum by the Rocky Mountain RR Club and moved to the Denver Federal Center for complete restoration. After many, many, many volunteer hours, and hundreds of thousands of dollars in donations, this trolley has been restored to its original 1911 appearance. The trolley is just about finished with only some minor things to tinker with as time permits. It has been 20+ years of hard dedicated work to get this far. For now the trolley is operational on a 1/4 mile section of track at the Denver Federal Center and is stored inside on Federal Center property. It is interesting to note that the track it operates on today is the same track it operated on over 60 years ago.

The #25 is now owned by the City of Lakewood, CO. Operators are provided by the Denver Tramway Heritage Society which owns and operates breezer trolley replica #1977 along the South Platte River.

Saturday's event is open to the public from 10am-2pm. Rides on the #25 are free, donations are welcome. The Denver Federal Center is located at 6th Ave. & Kipling St. in Lakewood, Colorado. Enter at gate #1 off of Kipling St. through the Visitor Gate. Everyone entering the Federal Center property will have to show an I.D. to the guard. Once inside, follow the road to the stop sign and turn right. Signs will point you to the trolley event.

We hope you can join us for a trip back in time on the Denver & Intermountain Interurban trolley #25!


Sounds like fun, Lee! Best of all, it's free!◊