Since 2006, the Rio Grande Scenic Railroad has been taking passengers from Alamosa over La Veta Pass to the town of La Veta and back. Over the last dozen years, the railroad has developed trips and events hosted at its exclusive, off-the-grid facilities at Fir. Many non-railfan patrons have repeated trips to events like Rails and Ales and concerts by regionally and nationally known music artists have become a regular feature of summers in the San Luis Valley. 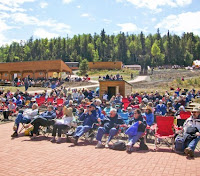 Such endeavors have become a source of revenue for Alamosa and pumped resources into the entire valley. But the passenger business is just a part of what the railroad has done for the people in this isolated region. The freight side of this short line, the San Luis & Rio Grande Railroad, has kept the valley supplied with all its vast needs. It has taken the valley's products from potatoes and produce to perlite and sugar and kept the transportation costs low enough to keep the valley competitive.

All that came to a crashing halt last week when a wildfire was deliberately set by an arsonist.

The Spring Creek Fire started June 27 and in only a week has already grown to become one of the three largest wildfires in Colorado's history. If conditions persist, it could easily exceed the largest ever. Low snowpack, inaccessible and rough terrain, and few water resources all combine to make this fire relatively difficult to fight. Residents in the area are struggling to get a handle on the destruction. They're not alone.

The railroad is already aware of several damaged structures that make service to and from the San Luis Valley impossible. In particular, a bridge located near Sierra burned and that alone has severed the link between the SLV and Walsenburg and the outside world.

Matthew Abbey, Corporate Director Passenger and Freight Development at Iowa Pacific Holdings, LLC, the parent company of the San Luis & Rio Grande, says, "The bridge at Sierra will be replaced with culverts and may be open by Friday." Restoring the link to the mountain and the outside world is essential. Once the link is complete, "we will then sprint to catch up the freight service; 400 jobs around the community rely on our rail connection."

Even with the bridge out, the railroad has already been working with firefighters to get water to the remote locations of the fire. "Our railroad is filling tanker cars with water and delivering them to the edge of the fire zone. We are delivering about 125,000 gallons per day on our nickel. They can fill four tanker trucks at a time. It’s amazing," Abbey said.

Nonetheless, all the water they can muster can't save structures that have already burned. The railroad's facility at Fir, near the summit of La Veta Pass, site of the many memorable concerts and events through the years, has not escaped the fire's fury. 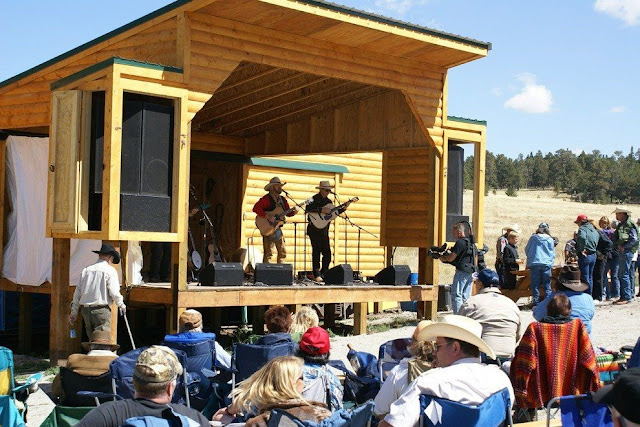 "The stage is gone. Utterly gone, with everything in it including all [the] back line, the solar and wind controllers, camp chairs, generators." Abbey said, "Its just all gone."

Chief among the losses is the concert facility's green room, an old theatrical term for the place where visiting performers wait before going on stage. It served as a sort of yearbook for the venue. The autographs, what Abbey called "the doodles ...artist graffiti," irreplaceable mementos of performances throughout the years are now lost forever.

Thankfully, the rest of the facilities at Fir are relatively untouched by the fire. "The remainder of the site is basically untouched. Needs a wash and it's ready for service." Because of its remote location, the concert facilities are off-the-grid and entirely self contained. "We have 15,000 gallons of water up there plus some pumps, so washing will commence when the evacuation order is lifted."

Despite the catastrophic loss of the stage, plans are already underway to resume the summer concerts. Though, without a proper stage in place, some compromises will be necessary. The brick dance floor will serve as the stage in the short term, Abbey said. "We will build, rent, borrow, or acquire a canopy for the dance floor so that the artists are covered. At this time, we expect that the next scheduled concert, Peter Yarrow [of Peter, Paul and Mary], will proceed as scheduled."

People who want to help do have a means to get involved. According to Abbey, a GoFundMe campaign is underway for Fir. "As pretty much everyone knows, we are a hard-working and dirt-poor railroad. So help is needed if we are to have anything after this season. It’s that simple."

A quick check of the crowd funding site showed that after 3 days, they had already raised $4,615, or 1.8% of their $250,000 goal. While resumption of the concerts is important, Abbey still believes resumption of rail service and those 400 jobs are the most important. "If we fail to re-establish this critical piece of infrastructure, we will make do for the last few shows and call it a wrap." ⚒


For hundreds of Spring Creek fire evacuees, “There’s been a lot of heartache”, Denver Post July 4, 2018.