Is it November already? No, but if you live on periodical publishing time like Trains magazine, it's close. November 2014 is Trains' technology issue, and they've reported on something I posited here last December: Photo/video shot via drone (page 7). Since then, I've seen them numerous times on geek blogs like Tested, but no one, to my knowledge, has sunk the money into the hobby and actually risked their robotic pride for elevation and for glory.

No one, except midwest-based Delay In Block productions and Evan Lofback of Knoxville, Tennessee, Trains reports. Rather than talk about how I envisioned the use of drones in railfan videos, I'd rather let Mr. Lofback show you exactly how good it can be. I've watched this quite a few times already and it's not getting old, even with diesels and eastern railroads!

So, now does it make sense?

If you're itching to try it, I can tell you that the first one to upload on YouTube a Colorado railroad video using a drone and notifies me or leaves the link in a comment on this post will have it appear as the first video highlighted on the sidebar on Colorado Railroads.* It will be up for at least a month. That's exposure! A narrow gauge and/or steam train video by drone would last longer, given the scenic and aesthetic value.

Evan Lofback has quite a few drone videos on his channel worth your time if you're interested.◊


* - content must meet basic standards. No bonus, bounty, payment, or other benefit (expressed or implied) will be given. No links to non-railroad related sites.

Rio Grande narrow gauge steam locomotive 491, Colorado's most recently restored steamer is part of the vaunted K-37 class. They were perhaps the largest, heaviest, strongest class of narrow gauge Mikados ever to work a narrow gauge railroad, with the possible exception of a couple of articulateds on the Uintah.

Starting life in 1902 as a Baldwin-built standard gauge locomotive for the Rio Grande numbered 1026, she was converted along with 5 other classmates to 3-foot narrow gauge in 1928. Additionally, Burnham shop machinists took her from a 2-8-0 wheel arrangement (Consolidation) to a 2-8-2 wheel arrangement, known as Mikado. The innovators in Denver's Burnham shops had no way of knowing that their work would long outlast the thundering, Big Boy-like articulated engines of the 2-8-8-2 L-131 class that saw work in the very same shops!

Yet, some parts of 491 make her twice as unique an engine. Colorado Railroad Museum intern Benjamin Fearn explains in the museum's Iron Horse News, the firebox of 491 has thermic siphons installed inside. Such devices worked to take more of the energy from the combustion in the fire and pass it into the water of the boiler. As it does, convection draws more water into the siphon to pick up more energy. Conservation and efficiency were useful concepts at Burnham, just like most steam shops of their day.

So, if everything goes right, 491 could be 13 years away--as a narrow gauge engine--in what could be a career not measured in years, but in centuries. As my favorite engine at the museum, I can't wait to see the completed work!

The story of the restoration of 491 is available in the Iron Horse News and in the museum's Roundhouse News blog.◊

Special thanks to John Hill for the timely photograph!

Perhaps nowhere--at least not in the last 40 years--is the idea of railroading in Colorado more realized than Tennessee Pass. A former narrow gauge route surveyed as a way to reach the riches of Leadville's mines and supply them, punched through the summit with a tunnel bore and classic lopsided profile of 1.7% grade on one side and 3% on the other, Tennessee Pass runs right through the heart of the state and until the Union Pacific merger in 1996, served with distinction as the highest mainline in the nation.

A whopping ten units on Tennessee Pass pull and shove their coal train up 3% grade at Mitchell, Colorado, September 5, 1995. With new AC4400CW and two manned helper sets, Mr. Danneman says, "This was Tennessee Pass at SP’s best!" It's hard to disagree, Mike.◊

PS: For those interested, Fred Frailey (one of the best) writes about the Long Autumn of Tennessee Pass in his blog at Trains magazine (2012).

Rio Grande 491 Operational! Celebrates with Tour of the Museum Loop

Ahem. After a few friends have poked me in the ribs, asking if I indeed knew this was happening at the Colorado Railroad Museum (I did, but family matters kept me away). I'm a little too excited, but I will keep my detached decorum. I will not geek out over a certain bit of news that just begs to be shouted from the summit of Mt. Elbert.

Instead... I will let the video speak for itself.

Just listen to that whistle halfway through. Oh, baby!◊

POTD: A Classic Reborn and Lit With Elegance

Denver's Union Station was almost slated for a date with the wrecking ball in the early 1980s. Then, someone responded to the call and formed a group called Save Our Station. And thank God they did! After millions of passengers, Union Station was due for an overhaul and RTD needed some way to tie FasTracks into one neat bow. Look no further than the Beaux Arts classic great room of Denver Union Station.

Looking for all the world like a cross between a wedding cake and a grand library, the inside of Denver Union Station is something to behold. Christopher May captured the newly restored, antique elegance that rivals any rail hub of any city anywhere. The great hall has never looked better! The timed exposure almost leaves the impression that the area is deserted. Always open, even late on a summer night for this photograph, Union Station may never close again.

A great place for ColoRail to have a party! They are, after all, the ones who inherited Save Our Station.◊

Just north of the border of Colorado near US-85, about equidistant between the outskirts of Cheyenne and the state line is Speer, Wyoming. Like most railroad places, it's just a spot on the map, a waypoint between here and there. In this case Speer is the junction where the north-south route of the old Denver Pacific connects with the main east-west Union Pacific Overland Route over Sherman Hill. This past week, 56 years ago, a Union Pacific Big Boy rolled westbound from Speer toward Sherman Hill with its manifest freight, and Dave Straight was there to photograph it.

Another September would never come for most of the Big Boys to haul freight. Just 10 months and 2 weeks to the day after this photo was taken, the same 4015 would make the last revenue run for any Big Boy over these same rails before being retired and eventually scrapped. Only 8 Big Boys were spared, including 4005 sitting at Forney in Denver and the celebrated 4014 undergoing restoration (as this is written) in Cheyenne, just a cinder's glide from where this was taken.

Special thanks to Dave Straight (and John Hill) for sharing this finely aged photograph with us.◊

Mike Armstrong is a photographer and videographer, posting on YouTube as CoasterFan2105. His body of work has grown quite a bit. So, as a showcase, Mr. Armstrong has put together a compilation of his steam videos and called it Steam Trains Galore! At the time of this writing, it has over 2.1 Million views. (You read that correctly.)

For 2 million pairs of eyes, the video is chock full of Colorado narrow gauge action (and a bit of RGSR's standard gauge engine 18). Thus, I've produced a small collection of notes detailing the different segments with links so you can skip to the parts that interest you. Honestly, my first impulse is to just let it run and see if you can identify the segments yourself. Just in case, however, I put the cheat sheet below.


Note: clicking the time links below will open the video in a second window (after an ad, which I have no control over, unfortunately)
Of course, Mike has put together a sequel called--what else?--Steam Trains Galore 2! It contains more of Colorado's railroads and engines for you to discover.

In the better-late-than-never department this week, we have the Pikes Peak region TECO Train Show. According to the press release, the show is three days this Friday, Saturday, and Sunday. Tickets are $5 a person, or $8 for a family.

Here are the full details 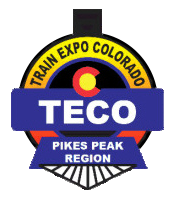 Continuing our lecture series, there will be special presentations on

TECO Shows are geared to accommodate model railroaders from novice to master modeler and to the general public's enjoyment. This is a great family outing event!

The TECO show is located at the


Here's a map to the show
Sounds like a great time! You never know what you'll find at these shows!◊

Hi folks! If you're having trouble reading this, or if the site looks out of the ordinary, I'm working to bring you a better, more functional site. Thanks for your patience.◊