Time to blow some dust off this video from the crypt vault. While I've not seen this recently, I have no doubt in my mind that this video used to be available on VHS, and trained eyes will be able to spot significant differences between the railroads captured on this DVD and their present state (like #346), which are improvements, for the most part.

Seeing the Colorado Railroad Museum as it was in the 80s brought back some memories from my visits and volunteer work. For those with the ability, volunteering there can change your world.◊

I just found something very encouraging being done at the Colorado Railroad Museum. For many, many years, the museum has produced a periodical called the Iron Horse News, started by their founder, Robert W. Richardson. They now have turned it into a video blog (Vlog) or video magazine. Take a look at the latest [YT] to see the improvement, then visit their channel on YouTube and subscribe to the museum to get new updates!

I was gratified to hear that Rio Grande K-37 Mikado #491 is finally, officially part of the museum. Long has the lonely example of the fabled narrow gauge 2-8-2 class suffered like her sisters from the weather while the smaller, lighter, and more versatile K-36 engines (480 - 489) remain in top condition because of their usefulness to narrow gauge circle, heritage railroads like the Cumbres & Toltec Scenic Railroad. The heavy, rigid frame of the K-37 engines tend to put more wear and tear on the bridges and curves. While the 491 is not slated for full restoration, this change in ownership was the first step in that direction. Here's hoping!

Great work, Donald and all the staff at the museum, especially the volunteers!◊

Heritage fleets just keep on getting bigger. This year, BNSF has finally gotten with the program and produced a half-hearted "heritage hopper" harem. It's almost as if they looked at UP and NS and said, "Oh, alright. Here. But don't expect us to paint them snazzy colors or anything." Both photos by Keith Schmidt.

The models were created by MTH, but probably could be adapted by the prototypic Union Pacific. A look at some concepts from the model railroading world might just show us what's possible for BNSF to try, if they're ever so inclined. In particular, Lionel (yes, that Lionel, 3 rails and all) designed some passable heritage designs that would catch anyone's eye.

As with Union Pacific, the road numbers of the locomotives signify a year. In this case, it's based on the year the railroad started (save Santa Fe), rather than the year they joined the system. While there are no prototypical or "real" engines for these models (at least, not yet), I have to admit that when the design is scaled up, they look pretty sharp. To wit:

Which is your favorite? What about a Colorado & Southern locomotive? Do you think UP should start painting heritage hoppers based on the success of the Heritage Fleet?◊ 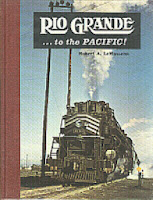