This is the second in a series of posts about the recreational opportunities in Colorado for railroad enthusiasts. This section will focus on the...

Southern Front Range
The southern Front Range of Colorado extends south of Monument hill and roughly parallels I-25 all the way to Raton Pass. The mountains viewed along this spectacular piece of highway include the Rampart Range, Pikes Peak -- also known as "America's Mountain" because Katherine Lee Bates wrote America the Beautiful after journeying to the summit -- and the Spanish Peaks, twin mountains rising abruptly from the plains.

Cripple Creek & Victor Narrow-Gauge Railroad - Cross between a mining train and it's "bigger" narrow-gauge cousins that has grown from relative obscurity thanks in large part to the casino gambling district in neighboring Cripple Creek. A grade, re-gauged from 3 feet to 2 feet allows diminutive trains pulled by mostly German engines to roll along a two-mile section of track just outside of Cripple Creek. This railroad could be called "touristy" and even a little "kitschy." Those looking to spend an hour aboard a "colorful" train listenting to a tour guide with a narrative will not be disappointed. Adults are $10.50, children ages 3-12 are $6.00 and seniors (65+) are given a whole dollar discount off the adult fare.
Railroad Adventures visit to this location in 1984.

Manitou & Pikes Peak Railway - Sighted by Zebulon Pike 200 years ago in 1806, Pikes Peak became a landmark for settlers travelling westward across the plains. Less than a century after it's sighting, Spencer Penrose had financed a railway to the top of the mountain that Pike believed to be unclimbable. Because most railroads lose adhesion above grades between 4% and 7%, the railway was built as a cog railway. A third rail was spiked down with stagge

red teeth that would be gripped by a cog wheel mounted on the engine's axle. The result was a railroad that was able to shove a carload of tourists to the top of the 14,110 foot mountain in half the time it took by donkey, the other popular mode of transportation up to the top.

Today, the motive power has switched from oil-fired steam engines to Swiss-built rail diesel cars, although steam engine #4 is still fired up for the occasional special. The train is scheduled to run all year long, but trips between November and May could be canceled due to snow or other reasons. The line is kept open using a large plow with a snowblower-type impeller. The experience is much more favorable in the summer.

Those making the journey from out of state may wish to take note that the altitude change is significant for a few hours of travel and some have been known to experience altitude sickness. Giving yourself a day in Colorado Springs or Manitou Springs before going up, along with plenty of water and rest, will help fight it off. My own experience with altitude sickness during my first trip as a boy up this route was not a pleasant one. Take your time to make sure you enjoy it.

Off-peak rates are $29 for adults and children ages 3-12 are $16. Peak season rates (July 1 - August 20) are adults at $31 and children at $16.50. Printing an online coupon will reduce your rate nicely. The depot is located in Manitou Springs up Ruxton Ave in Ruxton Canyon.
Railroad Adventures visit to this location in 2003.

Pueblo Railway Museum - Static display museum. Like the Boulder County Railway Historical Society to the north, the Pueblo Railway Foundation has accumulated a decent collection of cars and engines and stored them in a historic railroad location, in this case the Pueblo Depot. The depot itself is largely untouched by time. Combine with this the other historic railway structures, as well as the Riverwalk and a prime location on the UP-BNSF Joint Line, and this a hidden gem for railfans and their families. Best of all, it's free.

Royal Gorge Route Railroad - When the UP bought out the Rio Grande (Southern Pacific), the merger favored the Moffat Tunnel Route over the parallel crossing of the Continental Divide at Tennesee Pass, which was "rail banked" or mothballed. The Rio Grande's hard won route through the Royal Gorge would sit unused by freight traffic after experiencing a boom when the Rio Grande acquired rights from Pueblo to Kansas City. Montana Rail Link was interested in acquiring the route, but the deal never materialized. The owners of the corporation running the trains on the Georgetown Loop Railroad were interested in running trains through the Royal Gorge. It would be the first passenger traffic this stretch of historic rail would see since the Rio Grande discontinued the Scenic Limited (Rio Grande trains 1 and 2) 30 years before. 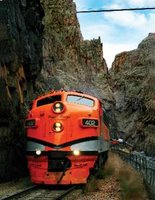 Building on the Rio Grande's heritage, the Royal Gorge Route has former Canadian F-units painted in a scheme similar to the Rio Grande's although they haven't gotten the color exactly right. Additionally, they have a GP-7 and an SD-9, both painted in the Rio Grande's gold-and-black freight unit scheme, currently sitting in the yard at Canon City (pronounced "Canyon City). Since beginning service, the Royal Gorge Route has slowly grown, adding classes and services like dinner trains and themed excursions. New this year, they've added three full-length dome cars to the roster, purchased from Holland America Lines. Passengers will have the ability to view the suspension bridge 1,000 feet above them while sitting in their seats for the first time in decades.

Trains depart the old Santa Fe depot at Canon City weekends at 12:30 PM for a trip through the Gorge to Parkdale and back, reversing direction but not the train. It seems the summer schedule, while scaling for demand, is difficult for the rail tourist to reckon without his calendar.

Beginning next weekend (May 21st), they will begin their summer schedule with trains every day at 9:30 am, 12:30, and 3:30. Their dinner train will run at 7:00 PM on Fridays and Saturdays and select Thursdays through the summer (click here for details). The mid-afternoon train at 3:30 PM will drop from the schedule August 20th except on Saturdays through the rest of the summer. Rates are $29.95 for adults and $19.50 for children ages 3 - 12 in coach. Upgrades are done a la carte. It's $10 extra for adults and children to upgrade to first class, and $25 above the coach fare for dome class. Lunch on board the train is roughly $40 above the coach fare and dinner is $79.95 total per person. Cab rides for those 13 and older are $99. It's a great experience for a railfan to ride in the cab with the engineer. They might even let you toot the horn for that price.
Railroad Aventures visit to this location in 2003.