Summer is practically upon us. So, in addition to the links at right, I figure it's only helpful for folks to see a good majority of the railroad opportunities that exist in Colorado. I've grouped them by region. We'll start with the...

Colorado Railroad Museum - Largest collection of Colorado railroading history located on the west side of the Denver metropolis, just east of Golden and north of the mammoth Coors Brewery complex. Large collection of static equipment displays is augmented by a loop of track completed in the late 1990s as well as an armstrong turntable and roundhouse used for extensive restoration projects. The Richardson Library is on the grounds, offering a boon to railroad historians. Their gift shop is a dangerous place for a railfan.

Steam-ups are:The very popular Day Out With Thomas will be consecutive weekends on September 16-17 (Sat-Sun) and 22-24 (Fri-Sun). Special tickets that go on sale in June are required to ride the train those weekends.

June 24 and October 7, the museum will have a free day, where no admission is charged. This is because the museum receives funds as a Tier II member of Denver's SCFD tax district. All other days, admission is $8 adults, $7 seniors $5 for children ages 2-15. We typically take advantage of the family rate of $18 that includes 2 adults and their children under 16.

Denver Union Station - Purchased by Denver's Regional Transportation District and intended to be the hub for their FasTracks project, this historic site is the departure point for Amtrak's California Zephyr, ANSCO's Ski Train, and the occasional American Orient Express (now rebranded as Grandeluxe Rail Journeys), along with RTD's C-line Light Rail route. It's facilities remain mostly unchanged, with the exception of a few bus ramps and light rail pads. Future changes include underground Light Rail access. A gift shop sells railroad schedules from decades past and other railroadiana. Admission is free.

Forney Museum - Formerly occupying a factory warehouse built over 100 years ago, the Forney Transportation Museum relocated to a new facility on Brighton Blvd in Denver after expenses of maintaining the building outpaced their budget. Now in better digs, the museum hosts all sorts of conveyances, not just railcars and engines, on static display. Of particular importance about the new facility is the ability to shield Union Pacific Big Boy (4-8-8-4) engine #4005 and other equipment from the elements outside. Admission is...*deep breath* adults for $7, seniors $6, youth (ages 11-15) $4.50, children (ages 5-10) $3.50, and children under 5 are free.
Railroad Adventures visit to the Forney Museum on November 16, 2001.

Ft. Collins Municipal Railway - A restored trolley line that runs along Mountain Ave. in Ft. Collins. It opened for the summer season on Saturday, May 6th. Half-hour roundtrip fares for adults are $1, seniors are 75 cents, and children ages 3 -12 are 50 cents...refreshments are extra.

Platte Valley Trolley - The PVT runs south from Denver's REI flagship store (formerly the Forney Museum) along the Platte River past Six Flags Elitch Gardens and the Denver aquarium. Not exactly an authentic trolley, as it's diesel powered, it gives riders a chance to view the Denver skyline and several LoDo attractions. Fares are $3 per adult and $2 for children and seniors (ages 4-12 and 65 and over, respectively) for the short, 25 minute excursion. Fares for the hour-long"Route 84" excursion are $6 and $4 for children and seniors.

Ski Train - The final descendant of the Denver & Rio Grande Western Railroad, the Ski Train has been carrying passengers up to Denver-owned Winter Park Ski Area for over 50 years, first under the Rio Grande and then under the ownership of Ansco, investment arm of Denver billionaire Phillip Anschutz, who purchased the Rio Grande in 1984, the Southern Pacific in 1988, and will finish his term with the Union Pacific as Vice-Chairman this year in 2006. Remaining outside the Union Pacific merger, the Ski Train continues to generate revenue by hauling skiers from Denver Union Station up to Winter Park each winter. In the last several years, however, the Ski Train has made summer runs up to the high country, mostly to Winter Park for its summer attractions, although runs to Glenwood Springs have also been made.
The destination is comfortable and fairly laid back, with activities such as mountain biking, miniature golf, wall climbing, hiking and a well-designed alpine slide. There are occasional specials run to Glenwood Springs. 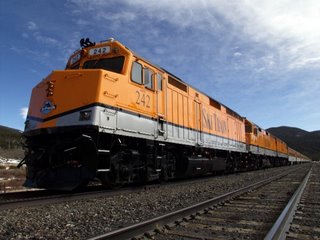 photo by Kent Meireis provided by SkiTrain.com
The motive power for the train used to include a Rio Grande lashup, but now leases Amtrak F40s painted in a modified Rio Grande F-unit (full cowl) design. Ansco has shown that they value the past while keeping a good eye for business.

Riders on the Ski Train will enjoy the same scenery enjoyed by the riders of the California Zephyr up to Winter Park. Coach seats are reserved for $44 for adults and $39 for seniors and children 2-13. Seating is 2-and-2 across, while Club seating is $69 per person, with wider seats, situated 2-and-1, and a catered continental breakfast on the way up and beverages and snacks on the way down. Perhaps the only thing better is realizing that you're not going to have to drive over Berthoud Pass and I-70 to get home. If you're looking to relax in the mountains for a day and live near Denver, you can't beat the experience.

Future entries for other regions of Colorado will be forthcoming.

For an exhaustive list of railroad locations in Colorado, visit the database at DenverRails.com.

Other posts in this series:
Dispatcher: Steve Departure Time: 16:21