Northern Mountains
In the mountains west of Denver, there was a gold rush that began in 1859 and a silver rush soon followed. Railroads like the Colorado Central and the Denver, Northwestern & Pacific drove deep into the heart of the mountains, using narrow and standard gauges to reach the gold and silver ore that came by the ton out of the Rockies. Today, remnants large and small make up the lines that showcase Colorado's beautiful and majestic mountains of north central and northwestern Colorado.

Amtrak's California Zephyr - In the late 1940s, traveling aboard a sleek, streamlined train was exciting, a premier mode of travel when air travel was a novelty and jet liners were still on the drawing boards. In 1949, the Chicago, Burlington & Quincy, Denver & Rio Grande Western, and the Western Pacific began combined service over the three railroads between Chicago, Illinois, and Oakland California. Passengers aboard the new California Zephyr discovered the scenic

wonders of places like the Colorado Rocky Mountains, the vast Utah deserts and the California Sierras. Riders departing Denver in the morning would ride in comfort on the Rio Grande, climbing the Front Range through the Tunnel District, thought the 6.2 mile-long Moffat Tunnel and down the western slope though Gore, Byers, Glenwood, and Ruby Canyons. By the evening they would reach Salt Lake City. It was stylish, beautiful, and comfortable. However, by the late 60s, the age of jet travel was in full swing and ridership dwindled. In 1970, the ICC (predecessor to the Federal Surface Transportation Board) finally allowed the Western Pacific to drop it's portion of the passenger route after WP repeadedly said it could no longer afford to continue service. The CB&Q continued to run their portion under the name California Service, although the train never approached the west coast, terminating as the Rio Grande Zephyr in Salt Lake. 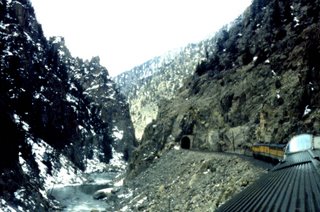 In 1971, Amtrak took over the nations remaining passenger service, dropping the majority of trains, never to be resumed. One route that was selected was the California Zephyr. Yet the Rio Grande opted not to join Amtrak because of the fees. As a result, Amtrak ran a San Francisco Zephyr over the UP, and the Rio Grande continued to run it's RGZ service 6 times a week, alternating daily East-West runs so that only one trainset needed to be used. This author rode the last trip of the RGZ in 1983 aboard a Vista Dome. That year, the Rio Grande entered Amtrak, which began an undistinguished era of service over much of the original route, with a few exceptions in California.

Today, passengers can ride aboard the Amtrak version and take in the scenery aboard a coach, sleeper, diner or "Sightseer Observation Lounge," Amtrak's successor to the dome cars. Board early in Denver and grab a seat -- first come, first served -- in the lounge car on the right side of the train to enjoy a spectacular view. A popular trip is from Denver to Glenwood Springs for a few days, soaking in the mineral springs. Fares for adults, seniors, and children vary with the season and other factors that impact intercity travel. Trains depart Union Station in Denver daily, with stops in Fraser (Winter Park), Granby (Grand Lake & Hot Sulphur Springs), Glenwood Springs, and Grand Junction. A route guide (pdf) is available.

Georgetown Loop Railroad - A short, 45 minute drive up I-70 west of Denver brings you Georgetown, a former mining town and home of the Hotel de Paris, where a cranky chef named Louis Depuy once produced world-famous cuisine for customers that fell under his

good graces. It is also home to a recreation of a stretch of the narrow gauge Colorado Central Railroad, which was then under the influence of Jay Gould and the Union Pacific, who used it to access the rich silver ores coming from the mines along Clear Creek. In order to drive the track from Georgetown to Silver Plume in 1884, a system of curves, bridges and a high trestle had to be built in order to ease the proposed grade from 6% to a more negotiable 4%. In the process the railroad crossed over itself nearly 100 feet above the lower grade, forming the Georgetown Loop. Promoted in flyers across America and worldwide, tourists flocked to ride the famous loop and ride the neighboring Argentine Central to the top of Mt. McClellan. After the Great Depression, the line was abandoned and in World War II, the trestle was dismantled for scrap iron to fight the war. When I-70 was being constructed, the route was intentionally diverted above the route of this historic railroad on the insistance of the Colorado Historic Society in order to preserve the possibility of restoring the famed loop to operation. In 1973, the Colorado Historic Society, partnering with the UP, began reconstructing the loop from Devil's Gate, a short distance west of Georgetown, up to Silver Plume. In 1984, a century after the loop was originally built, construction was complete and service, complete with steam engines, resumed. In 2004, the operator's lease was not renewed and for a brief time, it looked as if the railroad would cease operations. A new operator, Railstar, stepped up and secured the engines and equipment in time for the new season and once again the whistle of a steam engine echoes down the Clear Creek valley. On a side note, the domain www.georgetownloop.com is owned by the previous operator of the line and, as a symptom of the bad relations between them and the Colorado Historical Society, has not sold the domain name to either the CHS or Railstar, using it instead to divert ridership from the Georgetown Loop and promote their other railroad, the Royal Gorge Route.

Visitors can board the train in either Georgetown or Silver Plume for a ride over the loop. Seating is unreserved, with covered and open gondolas for riders to take in the beauty. A slow pass over the high trestle is obviously the best part of the trip, but riders will also be pleasantly surprised to find the refreshing river crossings and ride through quiet glades of pine and aspen to be very enjoyable. Tickets are $17.50 for adults and $12.00 for children. With four or five departure times per day at one station or the other, it's hard to find a time not to ride. Riders can also purchase a ticket to the Lebanon Mine, accessible only by the train, for and additional $8.00 and $5.50 respectively. On a final note, if there is one train trip in Colorado for families with small children, this is it. The short trip length, open seating, affordability, and convenience to the Front Range make this a winner.
Railroad Adventures visit to this location in 2004 and 1992. (Note that both trips are with the previous operator.)

Leadville, Colorado & Southern - Under the Denver, South Park & Pacific Railroad, a narrow gauge line was driven over Boreas Pass south of Breckenridge, down into Dillon, and then through Frisco and over Fremont Pass and down into Leadville. By reaching Leadville in 1884, the DSP&P had made itself a target of Jay Gould and the Union Pacific, who were eager to taste the profits of the Leadville mines. Once Gould acquired the railroad, he had no need to drive the Colorado Central further west and the line of the Georgetown Loop stopped at Graymont (now Bakerville) below Loveland Pass. Both the CC and DSP&P lines would find freedom from Gould's control in the reorganization of 1899 into the Colorado & Southern. Eventually, the C&S came under the control of the Chicago, Burlington & Quincy in 1908, later the Burlington Northern. In 1938, much of the C&S narrow gauge system was abandoned, leaving the narrow gauge line from Leadville to Climax isolated. Still, narrow gauge trains soldiered on, serving the mine at Climax until 1943 when the line was standardized. America needed Climax's molybdenum to harden steel for World War II, and a streamlined transfer process was necessary. Thus the line to Climax was standard gauged. Steam, however, continued to serve until 1962. Since the Union Pacific closed the former Rio Grande Tennessee Pass route in 1997, the line has been entirely cut off from the railroad world.

Today, one of the last steam engines to serve on the line sits on static display outside the Leadville, Colorado & Southern depot. Sold to a local couple in 1987 by the Burlington Northern for the whopping sum of $10, the line has been slowly and lovingly rehabilitated on a limited budget. Like the Georgetown Loop, open seating is in covered and open gondolas, but unlike the Loop, the LC&S is standard gauge, meaning wider cars and a larger and, well, dieselized feel to the trip. The line up the valley to Climax isn't especially scenic, but it is pretty, nonetheless. Riders coming from I-70 over Fremont Pass will find that they already traveled the route to get to Leadville. A GP-9 diesel backs the train up the pass and then comes back down with little fanfare. When last ridden in the late 90s, the concession car bathrooms were unfortunately an unpleasant.

Once you reach a certain point, the rails seem to wither and the train halts about a half-mile short of the pass summit. Technically, the rails do continue up to the mine, but the poor condition of the track leaves it at high risk for derailment, something unpopular with tourists and railroaders alike. The diesel engine, the lack of exclusive scenery (no other way to see it), and the "on-the-cheap" condition of the equipment all make it difficult to justify the fares of $26.50 for adults and $15.00 for children. Even paying an extra $35.00 for a ride in the cab or an extra $25.00 for a ride in the caboose seems too much. For the railfan, this is a good ride, not a great one.
Railroad Adventures visit to this location in 2003.

Glenwood Railroad Museum - The Western Colorado chapter of the NRHS has created a railroad museum in the east side of the depot in Glenwood Springs, about 150 miles west of Denver on I-70. A large scale model railroad, photos, and dining car china are all on display there. Specialized history is also featured, including a display devoted to the South Canyon Coal tram, Marble Tram, Treasury Mountain, Crystal River and the Crystal River & San Juan. No rolling stock is stored there, but they do have a D&RGW Fairmont A-6 speeder. A number of their patrons are riders of the California Zephyr, stopping there twice daily. Their hours are 12 - 4 PM, Friday, Saturday, Sunday and Monday, although they may close on Monday during July and part of August due to the Union Pacific rail replacement projects, which will divert the Zephyr through Wyoming. Fare is a requested $1.00 adult donation, with all children under 12 free.