Southern Mountains
The southern mountains -- for the purpose of this post -- extends westward from the front range bounded by South Park on the northeast, the Sangre de Cristo Mountains on the southeast and follows the 39th Parallel to Uncompahgre National Forest in the west and down to the Four Corners Monument.

Cumbres & Toltec Scenic Railroad - Originally a portion of the Narrow Gauge Circle, the line preserves one of the most picturesque sections of the line from Alamosa to Durango, abandoned by the Rio Grande in the late 1960s. A labor of love by countless volunteers, the Cumbres line runs from Antonito, 30 miles south of Alamosa, climbing up through Toltec Gorge, over Cumbres Pass (10,015 ft ASL), and down the 4% grade to Chama, New Mexico, a total of 64 miles and the longest narrow gauge railroad in Colorado. The route is as varied as it is scenic. Desert sagebrush, alpine meadows, mountain glades, and rugged gorges are all encountered on this day-long ride. The line is owned jointly by the States of Colorado and New Mexico and operated by a third-party private contractor in close coordination with the volunteers. Although funding has been an issue in the past, a fresh infusion of cash from Colorado may give the C&TS the boost it has needed since the 2002 wildfires.

Riders can board at either Chama, NM, or Antonito 7 days a week for a full run over the C&TS from now until October 15, 2006, although, depending on the day, you may end up taking 90 minute ride by motorcoach from one station to the other to board the train. It is also possible to take a trip to the halfway point at Osier and return to your originating station by train. A coach ticket to ride the train will cost $59 per adult and $30 per child ages 2 - 11, with lunch at Osier included. Coach is reserved seating, but riders are encouraged to visit the open gondola car. Travel by motorcoach to complete your trip and the fare rises to a total of $72 per adult and $36 per child. Parlor Car tickets are $115 per person, and their bearers ride in a plush coach with open seating and attendant service.

The Cumbres and Toltec Scenic is a railfan's delight. Passenger trains are double- and even triple-headed from Chama to Cumbres, to the extreme delight of steam fans. The standard day-long trip is not for every small child, so the C&TS folks have come up with a shorter, 3-hour trip called the Cinder Express on Thursdays. Tickets are $44 for adults and $22 per child ages 2 - 11. Whether indulging the little rainfan or the little railfan in all of us, the Cumbres is a special railroad that brings everyone a vital piece of Colorado railroading history.
Railroad Adventures visit to this location in 2005, 1992, and 1979.

A wide array of ticket options are available, but the primary service, the San Luis Express, runs from Alamosa, over La Veta Pass to the town of La Veta for a lunch stop and then back to Alamosa. This is a rare-mileage treat for the Colorado railfan, because a significant portion of the La Veta Pass line is isolated from the outside world. Tickets from Alamosa run $40 per adult, $25 per child, and $30 for seniors.

A secondary service, the Toltec Gorge Limited, is designed to serve passengers from Alamosa to Antonito in time to ride the Cumbres and Toltec Scenic and allows them to return to Alamosa that evening. Combined tickets for both the Toltec Gorge Limited and the Cumbres & Toltec Scenic may be purchased through the San Luis & Rio Grande. This service is ideal for those taking advantage of the inexpensive lodging in Alamosa. Click here for the opening weekend announcement.

Gunnison Pioneer Museum - Otto Perry, a legendary Colorado railroad photographer, filmed the last days of the Marshall Pass. Featuring prominently in these films and photos is the Denver and Rio Grande Western class C-16 engine #268. Cosmetically restored to its "bumblebee" paint scheme and sheltered in a new pavilion, the 268, some rolling stock including a caboose, along with a water tower from Marshall Pass and depot relocated from Sargents to the east, are all part of a larger outdoor museum exhibit. Admission to the museum is $7 for adults and $1 for children ages 2 - 11.
Railroad Adventures visit to this location in 1991.

Cimarron Canyon Rail Exhibit - Directly west of Gunnison on US 50 near the former cattle railhead town of Cimarron, the sister of engine 268, 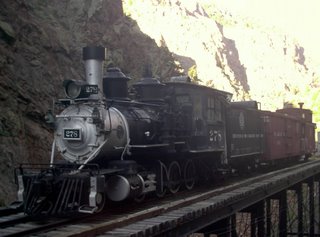 number 278 is parked on an isolated trestle spanning part of Cimarron Canyon. Nestled deep in an arm of the Black Canyon of the Gunnison, the static display is at once beautiful and lonesome, the epitome of Colorado railroading. Cut off from access at either end, the trestle functions as a guard against vandals with a moat of air between it and the road. Free.
Railroad Adventures visits to this location in 2005 and 1991.

Ridgway Railroad Museum - Continue west on US 50, head south at Montrose and you'll come to Ridgway, former northern terminal of the fabled Rio Grande Southern. With exterior static displays and a small indoor exhibit, the museum is best known as the home of the replica of Motor #1, the original Galloping Goose. It was completed in 2000, 69 years after the original Motor was built. Open on summer weekends with guided tours. Admission is free but donations are clearly welcome.

town of Durango with the mining town of Silverton. In the 1950s and 60s, the Rio Grande's days of narrow gauge railroading were winding down. Highways and airways sapped nearly all traffic from the line, yet one particular stretch of narrow gauge was experiencing a growth of passenger traffic. A small train run once a week called the Silverton Mixed began to experience a boom of railfans interested in riding and seeing the beauty of the very scenic line. It was the future of the railroad. Over the next two decades, the Rio Grande developed the train, expanding service to daily trains and then running them in sections. By the time the Rio Grande sold the line in 1980, the Durango train was well established, not just in the world of railfans, but in the general tourism landscape.

Today, even the most jaded tourist will still look up from their laptop and latte to see the black engine trailing a string of Grande-gold cars behind it. It is a pretty sight, one that has repeated itself up to four times a day on the rails that follow the Animas River between Durango and Silverton. While the line makes its money hauling tourists, it also acknowledges the railfans and "rivet counters" with an annual "Railfest" that includes specials such the RGS Goose No. 5 and the wood-burning Eureka 4-4-0 from the Eureka & Palisade. 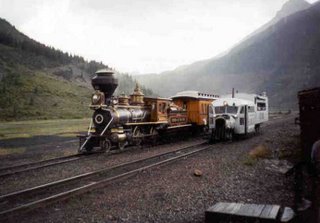 This year, the Railfest will be held August 23-27. There is also a fall photo special on September 23-24.

A run to Silverton and back is an all-day affair. While the coaches are historically accurrate -- some of the rolling stock dates back to before 1900 -- with two-and-two seating, they are not especially accommodating. Lucius Beebe wrote that using the restrooms onboard was a feat that would have amused Houdini. He wasn't far off. With luggage racks that are hardly more than ornamental, the coaches have only one place to store any gear, beneath your seat. Additionally, the windows do not loan themselves to pictures and riders are frequently seen "dogging" out the windows to get a shot of the Animas Canyon scenery. Those desperate to get a shot from one of the cars' platforms will be disappointed to find an attendant shooing them off. The camera hounds are much better off reserving a seat aboard one of the gondolas or aboard the new Silver Vista. Lunch can be packed or purchased in one of the restaurants in Silverton. Some of the restaurants have character, others have little more than burgers and rushing waitstaff. Either way, there is little chance that you'll miss your ride back to Silverton; the engine will whistle loud enough to make the hillsides echo for seconds afterward. Visitors to Silverton might be surprised to find that the town was once served by no less than four railroads at one time, each built to haul ore and supplies. Today, the mines are all closed down and the Durango & Silverton is the town's main reason to exist.

Tickets to ride a typical summer train are $62 for adults and $31 for children ages 5-11. Returning by motorcoach from Silverton to Durango are $7 more, which is a real consideration for parents of small children who by 2 PM are pretty tired of riding. It's possible -- but not probable -- to get in a motorcoach on standby. Premium tickets for First Class and Presidential Class are $109 and $129 respectively.

The Durango & Silverton is quintessentially Colorado: historic, scenic, colorful, and a little touristy. It's a memorable experience to ride on the High Line above the deepest parts of the Animas Canyon and quite a beautiful ride, with scenery not seen any other way.
Railroad Adventures visits to this location in 2005 and 1992.

Galloping Goose Historical Society of Dolores - In the 1930s, the Rio Grande Southern had to get inventive to survive the Great Depression. Among other cost saving measures, rail busses were constructed out of old automobiles and freight cars to give the RGS its fleet of Galloping Geese. In 1952, after the railroad finally dissolved, the RGS donated Galloping Goose No. 5 to the town of Dolores. In 1998, volunteers with the Galloping Goose Historical Society of Dolores restored the Goose. Because none of the RGS route between Ridgway and Durango survives, the society has taken to running the Goose on non-native, yet scenic rails of the Durango & Silverton and the Cumbres & Toltec. While the Goose is on display at the depot between these runs, and while there is an interior display at the depot with artifacts from the RGS, no website is available to give hours or information. E-mails should be directed to dolores@zone.net. There was a plan in 2001 to run track 9 miles out of Dolores for the Goose to have its own track, but nothing more has come of it.
One loyal fan at Narrowgauge.org has committed several pages to the wanderings of this Goose.