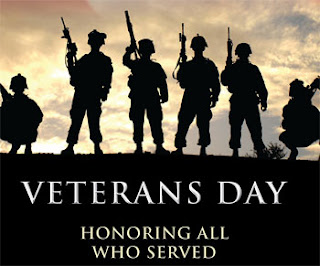 Today is 11/11/11. At the 11th hour on November 11th, 1918 hostilities were concluded in the Great War, World War I. In March 1917, the United States committed itself to the war when the Zimmerman Note was intercepted and made public. As many as 9 Million combatants died. Today, it's almost a footnote, which troubles this historian.


Today, Armistice Day is called Veterans Day, and it has renewed meaning with many of the veterans from the "global War on Terror" coming home. It's troubling for me to see them receive a luke-warm reception from a war-weary nation. It seems that ever since the Cold War ended, our military has been involved in one "hot" conflict after another. It's enough to make one almost nostalgic for the 1980s when we were scared to death of nuclear annihilation, but our veterans were usually over 30 years old. Our military's reserves and National Guard see active duty far more than most folks know, and "weekend warriors" who committed to some of their free time spent training can see as much active duty as Army regulars. Our  veterans are now as young as 18 and 19 years old. They come home wounded in body and mind.

I know that I don't show nearly enough appreciation for our veterans, even though I try to stop each time I see one who wears something showing their service. I remember a Korean War veteran whose aged hands were cold from the morning chill as he watched his grandson (great grandson?) play football. I shook his hand in appreciation for his service. It took only a moment, but I know that if people like me take the time to do that, it reminds them that people care about their sacrifice and it reminds me of the cost that's been paid so that my family is safer and able to make use of the freedoms we have. It's not so much sentimental as it is just and right to express such gratitude. Thank you, veterans, for the work you've done and what you've given. And to those who gave all they had, my humble thanks.

By the way, if you live near an Applebee's, they have an offer for all veterans and military today: