It's always a good sign when your friendly neighborhood railroad, usually BNSF or Union Pacific west of Chicago, starts adding capacity in your region. It could be a second main line between two points only a few miles apart, or it could be a third or (wow!) fourth main for 20 miles or more. After a century of contraction and abandoned routes, railroads are cautiously upgrading and adding rail routes.

When the Florence & Cripple Creek Railroad stopped operations in 1912 and officially abandoned its 35 miles between Florence and Victor, Colorado in 1915, it was the first few pebbles that heralded the beginning of an avalanche. By one estimate, nearly 2,000 route miles were abandoned by railroads in Colorado between 1915 and 1966, only 51 years. Put another way, 40 miles of railroad vanished every year for that period. Now, some of that was an elimination of duplicate routes between railroads, but a lot more was the reduction of service and wholesale abandonment of routes and complete railroads.

Factors range from competing traffic by asphalt and airplane to regulatory restrictions that were largely undone by the Staggers Act. So it's refreshing to see any new expansion, such as the UP project Kevin Morgan is tracking that adds a second main between C&S Junction and Arvada. Kevin said in an update why UP needs it.


UP appears to want the second track to be able to park a coal train between Tennyson Street and Lamar Street without blocking crossing. If both of the two new Belt Bypass tracks have trains in them, this would provide a new place for parking trains east of Leyden or Rocky. 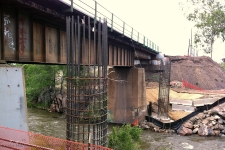 Right in his proverbial back yard, Kevin has the ability to monitor, photograph and update us via a dedicated page on his already-robust Colorado Railfan web site. Thanks, Kevin, for tackling this!

While not quite a major railroad expansion, it certainly hopes to alleviate a growing traffic snarl when beer and coal compete for space on Denver's rails. As far as an historic railroad expansion on the horizon, I believe market pressures in the next 20 years are going to push travelers away from fuel-intensive transportation like air and highway, and continue toward passenger rail, provided no other alternatives show up, like matter-to-energy conversion (Beam me up, Scotty!). Even if that happens, Amtrak will still be trying to do more with less, and pleasing half its riders while disappointing the other half. Some things never change.