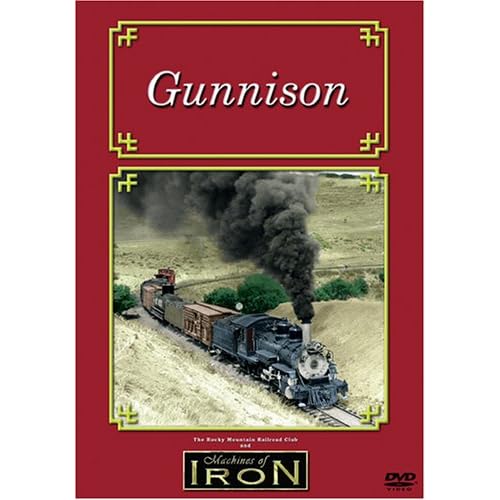 Dick Maddock is living a fantasy, and I envy him. Imagine running and maintaining your own private railroad, with a working, coal-fired locomotive to boot! I was especially gratified to see that he and his son "play trains" on weekends. This is what trains are all about for me, bringing fathers and sons together. Nothing is more worthwhile.
Dispatcher: Steve Departure Time: 17:27 No comments:

Email ThisBlogThis!Share to TwitterShare to FacebookShare to Pinterest
Tags: Model and Scale Railroads

I'm still awaiting word on whether the D&SNG ran the D&RGW 315 as announced (PDF) at their 9th annual Railfest. This being the last day of Railfest, we should hear something about it soon.

UPDATE 9/23: No such luck, but there's a rumor about it being available for a fall color special or two.
Dispatcher: Steve Departure Time: 13:42 No comments:

I could post all the footage and photos I got of UP 844 as it came south from Denver to Pueblo, but I would be hard pressed to keep up with Kevin Morgan of ColoradoRailfan.com. Seeing him near Larkspur and again in Pueblo, I saw how easily the pros drift through the amateurs and somehow make it all look so easy.

I still might post a few. I'll have to recover my ego first. In the meantime, I'm offering an editorial, although it will likely just add to the consensus of the railfan community at large.

I was reminded yesterday that mainline steam tends to bring out the very worst of railfans. I will spend little time citing what's wrong, but it's still worth noting that:
On the positive side, I appreciated so many of the fans finding discrete places to photograph the train. Positioning themselves in the bushes, below the grade or generally out of the way, many of the photographers were decent to each other and respected each other's desire for the perfect shot. Following the golden rule--even in a hobby--by talking with folks already set up about where you can go to stay out of their way helps everyone feel respected and yields some good rewards. The challenge of catching a locomotive at speed is challenging enough without climbing all over each other to do it.

While it's not unique to railfanning the events, there is a great opportunity for connecting with others. Among railfans, you can easily spot loyalties and what sub-category of railfan they find themselves in. There's the big steam fan, the narrow gauger, the local historian, the obscure short-line fan, the camera geek and the dabbler, to name a few. One usually finds a mixture of two or three interests in a single railfan, but there is usually a chief love, proudly proclaimed somewhere about the person on their shirt, cap or jacket, making it easy to spot each other. Striking up conversation about such a love is easy and opens up roads to long and true friendships.

Speaking of great loves, I was gratified at the UP's surprising good taste in letting the Rio Grande Heritage unit, UP 1989, assist the 844 over the Palmer Divide. It's always a beautiful sight to the eyes to see the flying Grande in gold and black on home rails, especially the joint line. It was 136 years ago, before Colorado was even a state in the Union, that the Rio Grande's founder directed the Grande to build south from Denver. When so many "& Pacific" railroads were going east-west, Palmer was the true entrepreneur, defying convention and running north-south to tap the riches of the Colorado piedmont on the way to Mexico City. That he never made it past Raton is dwarfed by the fact that his work still survives today.
Dispatcher: Steve Departure Time: 10:46 No comments:

UP 844 To Lead Colorado Mountaineer

http://www.coloradostatefairexpress.com/
By the way, the UP 844 will be substituting for the 3985. While we won't see an articulated in action, it should still be worth the time to see it. Here is the schedule.
Dispatcher: Steve Departure Time: 09:22 No comments:

Back In One Piece -- Unlike Georgetown Loop

After a brief hiatus, I'm back. Summer got the best of me and boy, am I tired! My apologies, especially to Kevin.

Ah, here's one item you might not have heard yet, but it was predictable. The Georgetown Loop Railroad has closed its doors. The banner at the top of its site says quite plainly, "No trains until further notice." Heedless, the Denver Post includes it as a "one-tank trip" in its August 11th issue. The blame can be thrown everywhere you want, but I think I could speak for the businesses of Clear Creek county when I say, with some sadness, that things were better before with the previous operator.

Who should fix this mess? It's my opinion that it should certainly not be the same people who created it. They've had plenty of time to salvage the situation. No one wanted this situation, including those responsible, and they should do the right thing and step aside as legally and quickly as possible. Some things just don't work well together, and now the jewel of Clear Creek is sits shuttered.

Operation Lifesaver will be pairing up with Union Pacific Railroad to promote grade crossing awareness in Delta, Colorado in early July. Visit the Delta County Independent for more details or tickets. ColoradoRailfan.com has speculated that it might involve UP's Rio Grande Heritage unit, 1989.
Dispatcher: Steve Departure Time: 09:44 No comments: