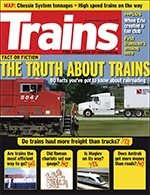 Trains Magazine has an article online backing up this month's cover article. The cover article itself posed an interesting question. You're at a party when, wonder of wonders, someone discovers that you're a train geek and they start talking about the "little known facts" of railroading, which actually could be myths. Do you know which are true facts and which are mythical falsehoods?
Are any of these true? You'll have definitive answers to these issues and more if you read the current issue of trains. Next time you're at a party, you might save yourself with these answers. Or maybe you'll just smile and nod as they go on in their ignorance.
Dispatcher: Steve Departure Time: 11:25