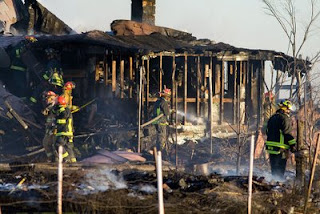 The Denver Post is reporting that as many as nine wildfires were started by a Union Pacific train on the Moffat Route through Arvada. Grass fires stretched for five miles on Wednesday at 6:30 a.m. A Red Flag warning was issued by the National Weather Service for the area at the time, meaning that conditions were ripe for any wildfires to grow quickly. According to Scott Pribble of the Arvada Fire Department, numerous witnesses claimed they saw sparks from the train ignite dry grasses next to the tracks. The fires stretched from West 72nd Avenue and Oak Street to near the junction of Colorado 72 and 93, near Rocky.

The fires set by the train engulfed the home and barn of 92-year-old Margery Kusulas, who escaped with her daughter Angela only seconds before the fire reached them from the tracks, some 60 yards away. The fire burnt both structures to the ground and threatened the Pioneer Ridge subdivision before being extinguished.

While mechanical crews cleared the cars of both trains that were in the area at the time of any mechanical problems that would cause sparks or ignition of wildfires, they have isolated one engine that they want to get a better look at as the source of the fires. Union Pacific spokesman Marc Davis said that the two possible sources on a locomotive, arcing electricity from a bad motor or diesel flashover in one of the vents, were very rare. Union Pacific says they are already working with the parties affected, even while the investigation continues.

For more details with photos and the original story by Howard Pankratz, visit the Denver Post.

Kevin Morgan has pictures as well.