The San Luis Valley has been a world unto itself for centuries. Cut off from the rest of Colorado by mountains on three sides, it has a rugged beauty and a feel that's different from the rest of the state. Once breached by the rails of the infant Denver & Rio Grande over Veta Pass on its way to Durango, the valley's riches were easily carried to Pueblo, Denver and beyond. Today, the Rio Grande Scenic Railroad based in Alamosa, Colorado functions as a short line feeding the Union Pacific connection at Walsenberg.

Adding new staff in the offseason, the RGSR has some changes lined up for the 2010 season. All of the trips will feature limited food service. Additionally, there are some improvements to the routes. 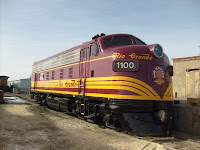 Don't forget the Third Annual Rails and Ales Brewfest on June 26th or the Bike 2 Build benefit on July 24th,
Despite the antics of Amtrak amid the failed Ski Train revival, the RGSR is doing very well for beginning its fifth year of passenger operations. What was rare mileage and unknown to most railfans is now a bustling standard gauge steamfest each year for young and old alike. With all this activity, Alamosa figures to be a great place for rail action this summer.
Hotels near Alamosa, Colorado
View Larger Map
Or view the RGSR's recommended dining and lodging options
Dispatcher: Steve Departure Time: 17:30