I am no stranger to writing about cab units favorably. I have long loved the Rio Grande's parade of EMD F-units that roamed Colorado and Utah in the 50s and 60s. On the other hand, it took me a long time to become a fan of Rio Grande's Alco PA and PB diesel locomotives.

Arguably, they are an ugly duckling when compared with her contemporaries. The Alco's cab is broad and flat, it's windows angular. What could have been a smooth, rounded nose is marred by a square grill housing around the pilot light. Nonetheless, the Alco is not without her charm. The cab has a softening line along her grills and a land yacht-like gracefulness that could be likened as a Cadillac to EMD's Chevrolet-esque appearance, a not-completely unfounded comparison, considering EMD's ties to General Motors.

So why is an Alco PA our photo of the day? Quite frankly, because it's time I recognize the worthwhile love of Alco fans. The PA's lines and the radiant Rio Grande colors of the matched (mostly) consist are especially beautiful, balanced against the Manitou Red Sandstone of the Pueblo depot and a spotless Colorado summer sky are so memorable, that at the time of this writing, I haven't seen this picture in a week and I can still describe it with vivid clarity. That's a photo worth keeping!

Thanks to Mr. Patterson for sharing with us!◊

Snow is certainly fitting today's photo as most of the state and especially the high country is coping with a fresh deposit of the white stuff. Of course, it's white gold to the ski areas, who just saw their high-drift mark of the 2015 ski season, Presidents' Day Weekend. If you haven't gotten up to the slopes, what are you waiting for? A Ski Train?

On the last day of January, 1966, it was a different sort of ski train that was kicking up the fallen snow in Fraser Canyon. You can almost smell the wind whipping the diesel and blowing snow crystals freezing your nose. Photographer Steve Patterson leans out the fireman's side of the locomotive cab to grab a shot of the consist as they blast through a turn on the way to Craig with the Yampa Valley Mail.

Of the nature of the train's ski element, veteran photographer Steve Patterson notes,


The last two cars carried skiers to Winter Park, and those cars will be handed off to counterpart Train 10 wherever they meet, and then pick up those skiers and take them back to Denver. The round-end dome Observation car was acquired from the C&O.

The dome observation car was certainly different than the all-silver sides of the California Zephyr. Even amongst clerestory roofed pullmans painted in matching Grande gold, it's hard to hide a vista dome in her native territory.

Sharp-eyed readers will note that it's not just any cab unit pulling the train. Perhaps it's a hint of a theme for later this week?◊ 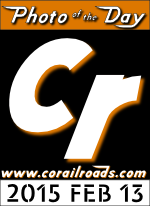 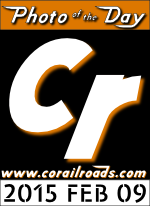