Ski Areas of Today Served By Rails of Long Ago

There's only a few practical routes through the Colorado Rocky Mountains, and railroads were among the first to locate and use them. Hardscrabble wagon roads gave way to steel wheel on steel rail in the late nineteenth and early twentieth centuries, guaranteeing the towns and services along the routes a good chance at sustainable success. Where rails were pulled up, asphalt was laid down and nearly all the routes have seen continued use with highways. The only notable exception is Rollins Pass, which was put out of service when the Moffat Tunnel opened. Perhaps because of this, Winter Park, which lies at the far end of the tunnel, is the only ski area currently served by a ski train.

It should come as little surprise that a majority of Colorado ski areas are sited near present day railroads or ghost railroads that have long been silent. Here's a listing of ski areas and the railroad grades that run nearby.
* The Argentine Central was the highest adhesion-worked railroad in Colorado, what most people would call a railroad. The highest railroad was and remains the Cog Wheel Route of the Manitou & Pikes Peak Railway
Dispatcher: Steve Departure Time: 22:37 No comments:

Because D&RGW #683, the single surviving standard gauge steam from the Denver & Rio Grande Western, is preserved at the Colorado Railroad Museum, the San Luis & Rio Grande management continues to find non-native steam power for it's scenic runs on its two excursion trains, The San Luis Express from Alamosa to La Veta and the Toltec Gorge Limited from Alamosa to Antonito to connect with the Cumbres & Toltec Scenic. They recently acquired two 2-8-0 steam locomotives from the Mt. Hood Railroad in Oregon. They are former Lake Superior & Ishpeming No. 18 and ex-Grand Canyon Railway No. 20. The engines are expected to be in service by 2008 and 2009, respectively, according to their web site.

The Union Pacific took the engines over the Moffat Tunnel route only to dump them in the Winter Park siding due to a clearance issue with one of the tunnels through the Front Range below the main tunnel. They are presently in Denver, according to DRGW.net, after a re-route through Wyoming, and will likely be in Walsenburg on Thursday evening, the 17th.

The San Luis & Rio Grande has also started construction of a maintenance facility. The irony is that after Union Pacific bought the Southern Pacific in 1996, it leveled the historic Alamosa facilities. Now, only 10 years later, the short line has turned Alamosa into it's hub of operations and needs a facility to maintain its fleet.

On a side note, the San Luis & Rio Grande also purchased five Santa Fe Big Dome cars from Holland America. The cruise line sold some similar domes to the Royal Gorge Route in 2005, which have greatly added to their passengers' experience. The Budd domes last ran between Anchorage and Fairbanks via Denali National Park on the Alaska Railroad. They should look much nicer than the "vintage" equipment the RGSR has used the last two years.

I think I speak for railfans everywhere when I say I appreciate the Rio Grande Scenic Railroad's efforts to expand the railroad tourism in southern Colorado. I've got to scrape a few nickels together to get a ticket to ride. Speaking of, if you'd like to contribute to Colorado Railroads, you can purchase some items from the Resource Siding at right. A portion of your purchase will help keep this railroad blog running! 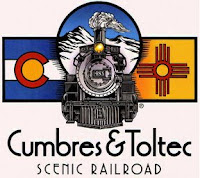 Gene Autry's Mudhen, #463, is a K-27 class Mikado that was used by the Rio Grande on her narrow gauge lines and one of two left in existence. Her sister engine is #464 currently working on the Huckleberry Railroad in Flint, Michigan. Since Gene Autry, the "singing cowboy," donated it to Antonito and then the Cumbres & Toltec Scenic, it has seen use on the 64 mile line between Chama and Antonito. However, since 2002, the engine has been sidelined with a broken rod.

The engine recently took a big step toward restoration when the Friends of the Cumbres & Toltec won a $300,000 grant to get it back in running condition. The total cost of the restoration is around $900,000 and the Friends group has commitments for $250,000 above the grant. A lot of variables likely are still blank but the engine could be back in the lineup by 2010, according to the article.
Dispatcher: Steve Departure Time: 10:15 1 comment: