This story has been all over the news outlets in Denver, and its reach has gone international, mostly for the shocking lack of common sense by all the officers involved.  Police from Platteville and Ft Lupton, two small municipalities north of Denver, pulled over Yareni Rios-Gonzalez, a 20 year-old woman from Greeley. They executed a high-risk stop, got her handcuffed and placed her in the back of a police cruiser.

Less than 2 minutes later, a Union Pacific freight train broadsided the cruiser at 50 miles per hour. Rios-Gonzalez was still inside.

She survived, and her lawyer is suing the police departments responsible.

Like the expert of record here, most are dumbfounded by the negligence of the police officers. What is less clear are the factors that made the accident possible:

But all of these wouldn't have mattered if the one officer had followed a rule given to all motorists in the Colorado Drivers Handbook in section 11.5: 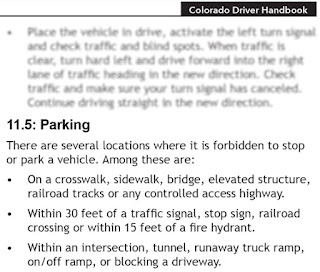 It's pretty hard to break two of the three bullet points in one maneuver, but the officer in question managed to find one instance where it's possible to do that. They managed to park on railroad tracks, and they were on a railroad crossing which is certainly within 30 feet. The tragedy is that this whole accident was something a 16 year-old driver could easily avoid by following the rules every driver living in Colorado is required to know and abide by.

Grade crossing safety is a clear lesson taught in handbooks, public service announcement ads, and campaigns like Operation Lifesaver, started 50 years ago this year by the very same Union Pacific. Like all instructions (and, incidentally, safety belts), they only work when applied. ⚒

PS: Since this was originally written, an officer was charged.