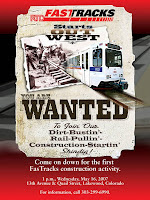 On a personal note, having grown up in the area and only seeing one or two trains on the line my entire lifetime, seeing the line in use for a very practical and helpful purpose will be very gratifying. It's still a question, however, how the north-south arteries like Sheridan, Wadsworth and Kipling will handle the double trouble between Colfax and the new traffic on the line.
Dispatcher: Steve Departure Time: 13:45 No comments:

Work With History at the Colorado Railroad Museum

As many tourist and scenic railroads begin to shake off the last bits of winter, the Colorado Railroad Museum in Golden has plenty of work for those who want to contribute as they can to preserving the railroad history gathered there. Please look over the list below, and call or email David Williams, volunteer coordinator, to sign up for the tasks and times that work best for you. (720) 274-5147 david@crrm.org.

Note that many of the jobs can be done any day of the week, not just weekends. Let us know when you are available.

The grounds and equipment should be made really spiffy for the spring season.

The roundhouse has an ongoing need for:
Reminder: those volunteers who are qualified for train operations should sign up for Steam-Up dates on the bulletin board in the Roundhouse. See the website for the full 2007 schedule: www.crrm.org.
Dispatcher: Steve Departure Time: 21:51 No comments:

The condition of tourist and scenic railroads across the state has been something of speculation lately. Specifically, a cloud hangs over the Georgetown Loop railroad operated by the state historical society and Railstar. After a season which most would describe as lackluster in 2006, their featured star, Colorado & Southern engine No. 9, needed repairs after only a few months in operation. It’s uncertain whether it was the heavy grades of the loop, the large passenger loads or the fatigue brought by mechanical efforts to compensate for the grades and loads. What is certain is that No. 9 will not be in operation on opening day 2007. Their remaining steam engine, Colorado & Southern No. 12 is questionable for the 2007 season as well. Repair work must be done before the engine is serviceable. It could be that the Georgetown Loop will be without regular steam for a considerable part of the season. The diesels they have secured are likely up to the task, but as evidenced in Durango and elsewhere, diesels just don’t draw the fans that steam does.

Meanwhile, the San Luis & Rio Grande has promised that the engine they purchased, Southern Pacific 1744, will be running over La Veta Pass this summer. SP 1744, a Baldwin 2-6-0, has a storied past, along with a troubled second life as an excursion steamer. The engine will be trucked in hopefully at the end of this month.