Colorado Railroads does not cover every grade crossing incident, but we can't ignore stuff like this.

According to the only surviving Denver newspaper, the Denver Post, a tanker truck in--where else?--Commerce City tried to beat the train and tied-lost. As a result, 5,200 gallons of ethanol were spilled, producing a fireball that was captured on private surveillance cameras. The truck, the switcher and pretty much everything at the crossing were burnt crisper than a tortilla chip and a total loss. The three men on the locomotive had injuries and a nameless driver for Roger Morris Trucking Co. escaped unharmed.

On further examination, the railroad involved was not indicated, but the switcher was a formerly cascade green Burlington Northern EMD SD road locomotive. The accident appeared to be a spur in the vicinity of the UP/BNSF crossover for the two lines northeast out of Denver, CP DS902 UP Junction.
Dispatcher: Steve Departure Time: 23:01 No comments:

Every July, Union Pacific runs the special to Cheyenne Frontier Days from Denver to the parade and rodeo in the Wyoming capital. Thanks to Kevin Morgan, we have some great photos of UP Steam engine 844 for Saturday the 18th and Sunday the 19th. 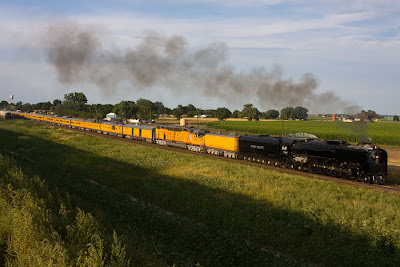 Cheyenne Frontier Days UP Special: A Story Worth Reading

It's not too often that railfans get their own press space, but when we do, it's a story worth reading. Favorite quote:

After touching the engine, steam piping from it moments before it left Union Station, Bob Phillips got a tear in his eye. "This is what America was and what it should be," said Phillips, who lives in Golden and owns a steamboat. "It's when America made stuff that mattered."

Future of the Region Written In Transportation Plans

In the early days of the automobile, a state's commitment to passable roads, also known as highways, varied. The difference of commitment could be so stark at times that a car that passed the border from one state to another went from an all-weather asphalt and concrete roadway to a rutted pit that snarled the tires and reduced travel to a veritable crawl. The U.S. Highway system, and later the Interstate network, eliminated the disparity and altered the method of travel in the United States on a fundamental level from rails and wagons to buses and cars. American culture, its way of life itself changed as a result, all within the period of about 50 years.

Another 50 years before that change started, an American pioneer surveyed a route to Denver for the Kansas Pacific Railroad. That surveyor was General William Palmer. It was no small migration he was a party to, and with this westward focus, Palmer saw a unique opportunity. While routes were strung west and east from the Mississippi River to the Pacific, no one had made a serious endeavor at a north-south connection between these lines. A connection between these routes would open up a new way of passing commerce between the two points. His initial plan was to connect Denver with El Paso, Texas. Eventually, he hoped to reach Mexico City and build trade relationships from there. Additionally, Palmer likely reasoned that the flow westward would eventually stabilize. The west coast was not a bottomless pit; it would eventually fill up and people would fill in. It did, about a century after his journey.

Since the westward expansion, just like water in a miner's pan, people have sloshed about, following the direction of money, prosperity and the hope of a better life and a brighter future. It has been a pursuit of happiness, some lives successful and others not as much. What has stuck, even through the liquidity of economic upheaval, is that people and the directions they travel have a sympathetic relationship. Good sources of revenue in a given location bring better roads. Better roads bring more people, and more people facilitate more good sources of revenue. Conversely, no revenue leads to poor roads. Poor roads leads to fewer people, and fewer people produce even less revenue. Therefore, it stands to reason that proponents of transportation, whatever their motive, ultimately advocate prosperity while naysayers advocate shrinking decline. This is a timeless principle, borne out over centuries of Western Civilization, from Roman roads to the latest commuter rail line. Why then, are naysayers given any credence when they raise the tired dogs of cost and doubt? We listen to them at the risk of our future.

Palmer's baby road was stopped by the snake of the Santa Fe Railway and never crossed Raton Pass on Colorado's southern border with New Mexico. Instead, it's westward wanderings to tap the Rocky Mountains gold and silver deposits to drive the rails further south became an end unto itself, eventually driving all the way to Salt Lake City, Utah. Had the Rio Grande actually reached El Paso, Denver's history and the remainder of the west would have looked far different today. What future will today's transportation efforts bring us? Will Colorado, New Mexico, and Texas be successful in their joint effort to secure the 11th high speed rail corridor for a vision similar to Palmer's ultimately succeed? Let's hope so, for our future's sake.

BNSF Railway and Vehicle Projects Inc recently unveiled a new hydrogen fuel cell locomotive to a Topeka, Kansas crowd. The switcher will test at the DOT Test Center in Pueblo before taking its place in service in Los Angeles along side other "clean burning" switchers. The time of the move is unclear, but being the first of its kind, it has a lot to prove.
Dispatcher: Steve Departure Time: 11:58 No comments:

A Done Deal - RTD Buys Boulder Line From UP

Despite slumping revenues and a continuing shortfall for it's FasTracks project, Denver's RTD has secured the right-of-way for a commuter rail line to Boulder. Well, kinda. They didn't secure the rail line into the city proper. In fact, they've gotten as far as Valmont.
To make sure no one is mistaken, this is not the BNSF line from Denver to Boulder, a logical, direct approach which might be accomplished by the Northwest Rail Corridor (pdf). Instead, this is the North Metro Corridor (pdf), the Union Pacific line that follows I-25 to north of the NW Parkway interchange near 162nd Avenue (?!) and then turns west toward Boulder, following a serpentine right-of-way, dodging farms most of the way. RTD has transfer agreements governing the next three sales which will help them build the East Rail Corridor (pdf), the Gold Line (pdf) (Arvada) and a small portion of the West Line (pdf) already underway in Lakewood.