Video Of C&S 9 On Georgetown Loop

Thanks to Karl S. of Trainboard. He put up video of Colorado & Southern No. 9 that he shot vertically using a small handheld back during the short fall season. Yes, that's real snow coming down. To quote Karl, "...On the next run, it was snowing so hard you couldn't barely see from one end of the train to the other. Riding behind No. 9 in an open car in the blinding snow was AWESOME!!!"

Great Western had a road unit in the ditch on Monday out on US 34 west of I-25 near Kelim just south of the bedroom community of Windsor. No injuries were reported. A crane was brought in from Cheyenne to lift it out of the mud. Longmont FYI has the story.
HT: John Barnhill

Additionally, BNSF lost some coal hoppers at the stock show in Denver on Tuesday. The mainline was cleared relatively quickly. No injuries reported at this derailment either. Additionally, no cause has been determined in either derailment, but no one has ruled out the recent spate of cold weather that's been in the state for weeks.
HT: Steve Brown
Dispatcher: Steve Departure Time: 17:57 No comments:

According to the Denver Post's coverage of freshly inaugurated Governor Bill Ritter, the Governor is embarking on a special UP train today from Brighton to Pueblo. The Post says,

Early Saturday, Ritter and O'Brien plan to continue the inaugural festivities with a whistle-stop tour along the Front Range. ... They'll board a vintage Union-Pacific train - described as the Brown Palace Hotel on wheels - in Greeley and make stops for rallies and speeches in Brighton, Littleton, Colorado Springs and Pueblo. The day will end with a spaghetti dinner at the Pueblo Union Depot.

DRGW.net reports that the power for this trip is unknown. However,

The tentative schedule, as posted by "mojaveflyer" on Trainorders, is as follows:

The freshman Governor will be touring the rest of the state by plane next week. There are no indications as to whether this indicates Ritter's openness toward commuter rail service along the Front Range or a rail-oriented option for the I-70 corridor, but given most liberal's favorable predisposition towards collective mass transit, it is certainly a possibility that there may be new passenger routes within the Centennial state by the end of his term.

Kevin Morgan of coloradorailfan.com has photos of the plow train extras that were run by the UP on the old Kansas Pacific line to counteract the effects of the Christmas and New Years Eve blizzards. As always, the photos are excellent. Here's a sample: 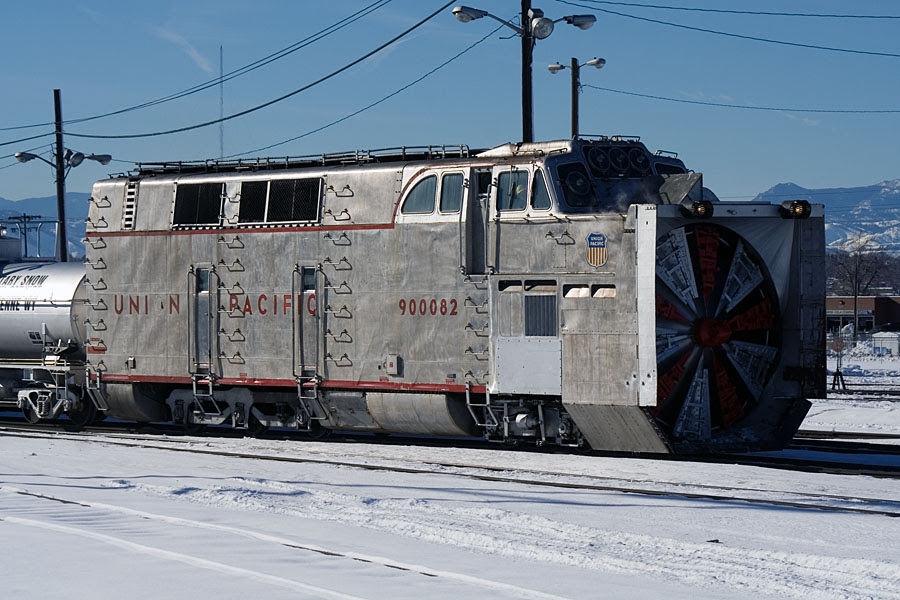 Of particular note is the DRGW Jordan spreader, which Kevin notes was used on Tennessee Pass before the UP closed it.
Dispatcher: Steve Departure Time: 07:24 No comments:

The Colorado Railroad Museum (www.crrm.org) has announced the steam up dates for 2007. They are,
If you love steam or want to give your kids a memorable experience, consider taking them down to Golden on one of these dates between 10 a.m. and 4 p.m. Any day is a good day to visit the railroad museum, but these days have an air of excitement and enjoyment.

Note: The SCFD days (free admission days) have yet to be announced.
Dispatcher: Steve Departure Time: 06:50 No comments: