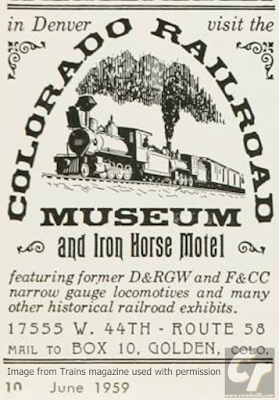 As near as I can figure, I think I have found the first ad ever placed with Trains magazine by the Colorado Railroad Museum, all the way back in June 1959! Robert W. Richardson and Cornelius W. Hauck were fans before the end of the Rio Grande Southern broke the thousand-mile Narrow Gauge Circle, and they kept lit the flame of Colorado's railroad history even before they opened the museum that year.

They first had a go of it years before near Alamosa, operating the Narrow Gauge Motel, complete with steam engine and station. Often using their own funds, they worked to preserve railroad history without much else. They fought tooth and nail for artifacts and records from railroads and operators who couldn't understand why old forms and paperwork wouldn't just as well be burned with yesterday's trash.

Thanks to the work of these "rabid" fans, the details and means by which a lot of these railroads operated hasn't been lost to time. Most importantly, their efforts to build a place for future generations of railfans sits nestled between the table mesas of Golden as a Colorado railfan's paradise. It's here in the western reaches of metropolitan Denver that some of the next generation of railfans discover the mystique of faraway places like Marshall Pass, Cerro Summit, Ridgway, Rico, Pandora, Dolores, Mears Junction, and so many more. These aren't just places on a map; they're gateways to a time when the clang of a bell and the wail of a whistle echoed beckoning the willing to follow where the rails would lead.


What I appreciate about Richardson, Hauck and many others is that they didn't wait for someone to give them permission or a commission to go out and save the narrow gauge. They saw a need, looked around and then stepped forward to help. Common men doing uncommon things. ⚒