"The nine most terrifying words in the English language are: I'm from the Government, and I'm here to help." - Ronald Reagan

In what could be described as an official Federal agency doing what it does best, the Orwellian-named Environmental Protection Agency in the course of its duties made a well-intentioned but badly planned exploratory excavation at the site of the Gold King Mine. This excavation triggered a release of one million three million gallons of severely contaminated water that had seeped into the mine since it ceased operations nearly a century ago.

The Gold King Mine was connected by bucket tramway to the Gold King Mill, which was served by the 7-mile long Silverton, Gladstone & Northerly Railroad--the last of the four fabled Silverton Railroads--from 1899 until 1917 when it was foreclosed on by Mears, who merged it with the Silverton Northern for operations until 1938 when the closure of the mines spelled the demise of the SN. In reality, Mears only had 7 years to get what he could because the SG&N line only saw traffic until 1924. Only 25 years of operation, and then the mine sat for 90 years like a ticking time bomb, the mining companies, miners, machines and precious metals all vanished like ghosts. 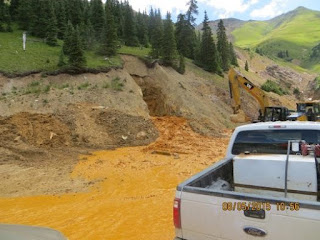 The spill itself points to a larger problem that Colorado and the western states have ignored for some time and will not simply "go away." Some estimates put the number of potential problems near 55,000 sites. While not all of these sites are going to turn loose a toxic brew of lead and arsenic compounds, they are going to continue to challenge Colorado and the nation with potential spills in the foreseeable future. At this point, reactionary plans at the EPA are just going to anger more and more of the population around the Four Corners with poisoned taps, poisoned livestock, and poisoned crops. One can only assume that tourism is the next thing to go.

The bitter irony is that the Durango & Silverton Narrow Gauge Railroad's original reason for construction by the Rio Grande, to capture revenue by servicing the mines of Silverton, is now threatening its present stock-in-trade, the scenery of the Animas River, for which tourists pay top dollar. Until residents of the San Juan district, the state, and the nation make the decision to fix the problems of the past, they will continue to lose their future. If mines were stabilized and the stained rocks of the Animas were cleaned up and restored, I would wonder if we have enough engines to haul yellow narrow gauge trains filled with tourists up & down the Animas each day. So, San Juan residents, Coloradoans, and Americans, what do you choose: yellow rivers of poisoned water or rivers of yellow revenue trains of tourism?◊