Climb aboard, brakeman! We're going on a run for the latest Colorado railroad photos out there on the web. Put your grip beneath your seat, click the Read More link, and we'll get moving!

First siding is www.rrpicturearchives.net where we have a long string of lookers. Remember that derailment below Tunnel 1 on the Moffat Route in December where the cars fell from the bridge onto Colorado Highway 72 at Coal Creek Canyon? Bill Hedges was able to capture the mess while the cars were still on the ground. 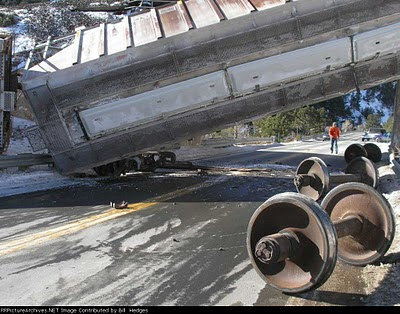 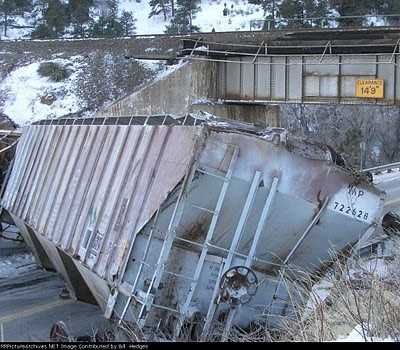 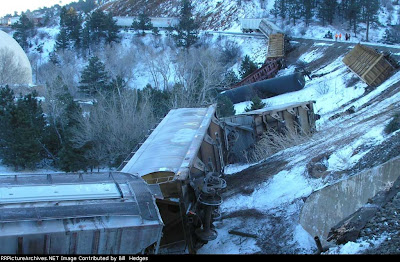 Also along the www.rrpicturearchives.net siding, we have Jared Childress and his shot of Ansco's Ski Train at West Portal on one of its last ever runs in March. Alas, we may never see another like this. 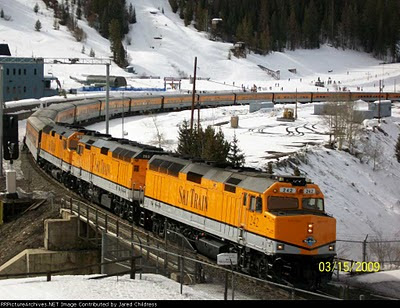 On the west end of the siding, we have two more to pick-up. First, Zack Pumphrey took this truly great picture of a BNSF Bluebonnet and a UP SP Rednose in the winter night of Colorado Springs. Being in the right spot at the right time is only half of good photography. Zack shows us the other part with stirring lighting effects! It's amazing what you can do with a Canon Digital Rebel XTi 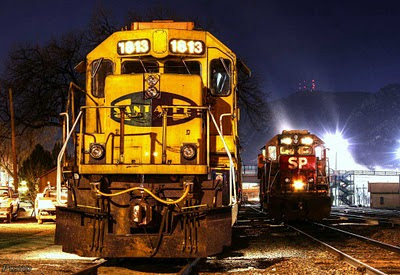 Second, Brian Woodruff presents a shot by Mike Woodruff taken all the way back in June of 1981 when the Rio Grande was still running the Rio Grande Zephyr between Denver and Salt Lake City. Here is the Rio Grande's last surviving F9A, the 5771 taking service in Grand Junction before taking the silver lady on her way. 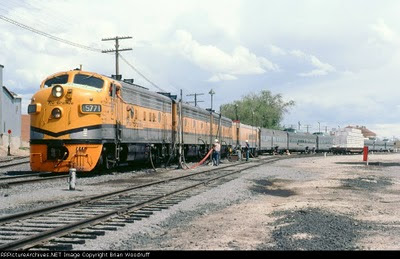 That finishes one of the busier sidings on our run, but we've got some orders for another siding nearby. In fact, the two sidings can get confused for each other. This next one is www.railpictures.net and we have three cars set out.

The first is Chris Nuthall's recent upload of Rio Grande GP-30 #3019 taken as she sat at Glenwood Springs on the foot of the Aspen branch back in November 1981. Perhaps the crew jumped off for a quick soak in the hot springs? I couldn't blame them. 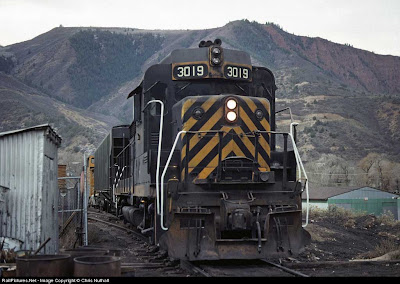 Next, a very prolific Caroline J has a shot of BNSF 5640 leading a coal drag in front of the barn at Greenland on the Joint Line. The morning light brings out the pumpkin in the Heritage 2 paint scheme on the GE AC4400CW. 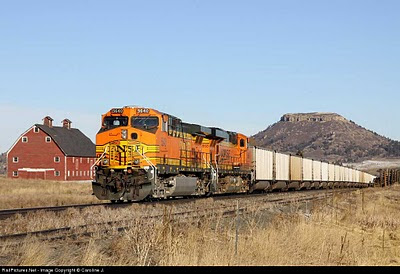 Last on this siding is Don Hall's 1987 shot of Rio Grande Tunnel Motor 5374. Although the shot was taken in California near Soda Springs, the shot shows that the Grande's nickname Real Grime was not completely undeserved. Make sure you grab your gloves for this one! 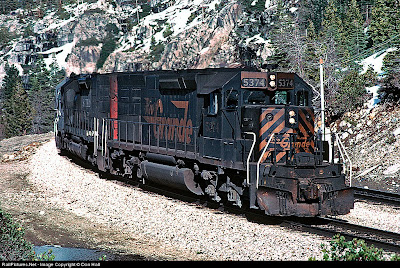 Our next siding is a favorite of mine, www.Trainboard.com, also known as www.railimages.com. Regular contributor HemiAdda2d (i.e. Hemi Attitude) recently added two artful shots from the Moffat Route's tunnel district. The first is looking through Tunnel 14 at Tunnel 15 using his Panasonic DMC-FZ18 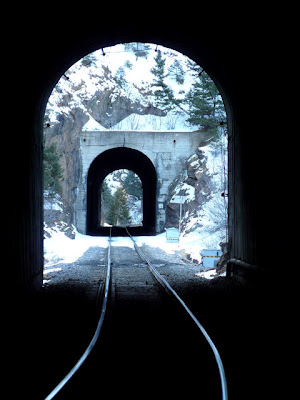 The second is of UP 5985 charging the entrance of Tunnel 13. With the help of a long focal length and cropping his shot, Hemi makes it feel much closer than it is. With that amount of light reflecting off the rails, you know that the Moffat Route is seeing plenty of use. 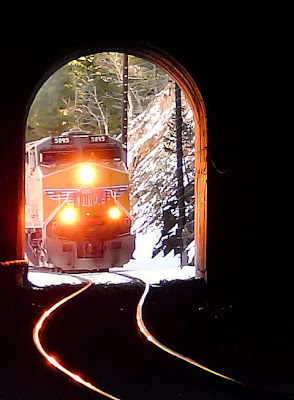 Next we'll leave the division for a quiet run out to Flickr.com and pick up a shot by Tim McClung, who goes by the profile Top Gun 4850. He took this shot of lead units BNSF 6227 and 5616 on January 31st and while he didn't list the location, I'm assuming he shot it on the Joint Line 3-track main as it rounds the southwestern edge of downtown Denver near the RTD Light Rail station at the Pepsi Center. 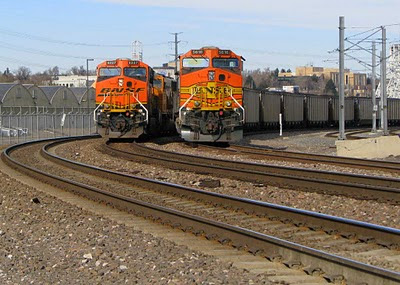 Pulling back into the division, we have one last pickup to make before the completion of our run today. Kevin Morgan of www.ColoradoRailfan.com has been gradually catching up on his backlog of photos since last year. He is a Grande man and a very capable photographer with his Canon EOS Digital Rebel XT

. At one location on the Moffat Route called Little Ten Curve, Kevin captured two different trains with two very different looks. Amazingly, they were taken only two days apart in late October! The first is a Union Pacific coal load headed east toward Arvada on a sunny October 23rd with unit 6430 in the lead. 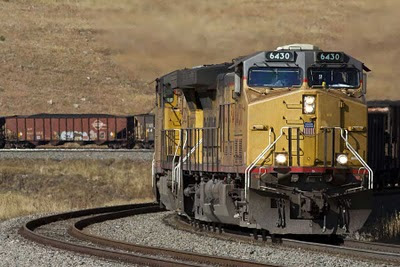 Next, at the same location, two days later on October 25, we find a BNSF tank train westbound through a snowy winter landscape. What a difference! 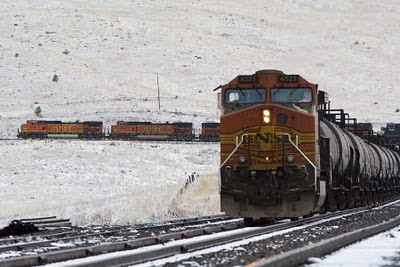 Finally, our last pickup is a shot of three BNSF engines with three different color schemes. BNSF 1115, a Dash 9-44CW is in Heritage 1 paint. Unit 5276, also a Dash 9-44CW, is wearing Heritage 2 with the cigar band on the nose. Unit 7595, an Evolution Series ES44DC is sporting the current flavor of the month, the (I'm not kidding about this) "New Image," or whats known to most as the Powerbar or Heritage 3 paint scheme. If only the frame were large enough to capture all the schemes in the last 20 years! 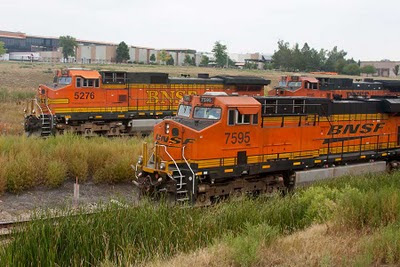 Well, what did you think? What would you like to see more of or less of? Drop a comment or send an e-mail with your thoughts. Thanks for taking a ride with me on this first photo run! Have a great weekend!