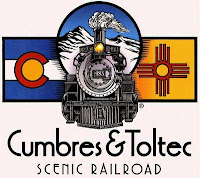 Wrinn concluded, "On a railroad like [the C&TS], such passion and drive are as important as coal and water." While Honegger was just as vital as coal and water for steam, people of his ability, passion and drive are exceedingly rare. A loss like this is undeniably severe.
For more regarding the fallout, read the Albuquerque Journal article, Rough Times For Scenic Railroad, reposted here.
Dispatcher: Steve Departure Time: 18:24