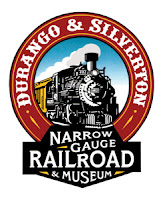 I have long thought about the idea of designing a logo for this site that emphasizes the state it serves. Part of the reason this blog has been as quiet as it has recently is that I've been teaching myself how to work in SVG, an extension which is an industry standard in graphic design. That and trying to learn the legalese of protecting my work once it's out there. I hope you like it, and, if they're well received, I'm going to work on how I can integrate these logos into the site. If your feed does not display the logos below, click here to view the logos in their original post.

What do you think? Comment in, or vote on the poll at top right!

Email ThisBlogThis!Share to TwitterShare to FacebookShare to Pinterest
Tags: In the Roundhouse

According to Trains Magazine's News Wire, BNSF is sending a "fire train" to assist with protecting sections of the Joint Line threatened by the Waldo Canyon fire, which is currently threatening several communities, most notably Colorado Springs. The sections of the Joint Line under threat are actually owned by Union Pacific, which inherited the originally narrow-gauge main line of the Denver & Rio Grande Railroad in the UP-SP merger September 11, 1996. Despite this, BNSF's trackage rights go back to the USRA and World War I, and keeping the line in service is paramount to keep Powder River and Yampa coal flowing south to Texas.

The Rio Grande Scenic Railroad that runs between La Veta (near Walsenburg) and Alamosa, Colorado is offering 50% off tickets for all seats departing June 29, 30 & July 1, 2012. Use the code "valley radio" when purchasing your tickets. The tickets will also give you access to the concert at Fir by bluegrass act Special Consensus and singer/songwriter Anne Hills.

Guests at the historic Cliff House in Manitou Springs were turned out of their beds in the early hours of the morning to news of evacuation orders. Manitou is the home of the Cog Wheel Route, the Manitou & Pikes Peak Railway, along with many unmarked and marked artifacts of the Rio Grande and the Colorado Midland Railroads as well as it's successor, the Midland Terminal Railway that have survived up to now. Hopefully, the evacuations are just a precaution. The test will come later this morning when the winds pick up. If the worst happens, it wouldn't be a tragedy to lose artifacts or equipment. The real tragedy would be if human lives are lost. People are irreplaceable.

In July 2009, BNSF 6851 was running long hood forward in Commerce City when an ethanol truck tried to beat it through a crossing. Had it been running short hood forward (with the cab on the front of the train, it's likely that all three of the crew aboard the engine would have died horribly in the massive explosion and fire that engulfed most of the engine. As it was, only one of the crew was injured, spraining their ankle after leaping from the front of the engine.

After the fire, the engine was driven away under it's own power. Despite it's stout survival of the fire, it has sat in Globeville near the BN shops, with only the nose of the unit showing that it once was painted BNs Cascade green. Speculation is that the locomotive has sat untouched for the purposes of litigation surrounding the accident.

In 1970, Great Northern, Northern Pacific, and the Chicago, Burlington & Quincy Railroad merged to form the Burlington Northern. The new "futuristic" BN logo and Cascade green will be a ubiquitous sight along the northern Colorado plains and the Joint Line for the next quarter century.

Like Tuesday's POTD, today's photo was taken at Palmer Lake, except this time facing south. The color seems to have faded, but the engines appear in much better shape than tomorrow's POTD.