Two teenaged sisters and their grandmother were killed when they drove in front of a BNSF freight train in Otero County here in Colorado on Friday evening. According to the Denver Post article, Trooper Gilbert Mares of the Colorado State Patrol said that Devonna Griffin was driving a blue Dodge Durango north on Otero County Road 20.5 about a quarter mile east of Rocky Ford at 4:49 p.m. when the train struck the vehicle. Driver Devonna Griffin, 17, front-seat passenger Krystal Griffin, 19, and back-seat passenger Joan Griffin, 66, were all killed in the accident.

According to a more detailed account in the Rocky Mountain News,

The SUV was hit on the driver's side, which sent the vehicle spinning counterclockwise. The vehicle went off the east side of the roadway and came to rest on its right side, facing southwest.

The train was a local BNSF freight working out of Denver, crewed by three employees based out of La Junta. None of the crew were physically harmed.

The reason for the driver's failure to yield to the train is still under investigation, although at least one article interviewing the victims families posits a few theories. US Highway 50, the main highway in the area runs parallel to the tracks just north of the grade crossing. It could be possible that the most inexperienced driver of the three victims ignored the crossing because she was approaching the highway, a danger perceived by the young driver as more imminent or more threatening.

Whatever the reason, the tragedy is that three women lost their lives in an accident that could possibly have been prevented by railroad crossing lights and arms. This same grade crossing claimed the lives of two men earlier this year and Otero county officials prioritized the crossing for the improvements. In fact, one report presented that Otero County had taken delivery of such safety devices but had not installed them. The improvements will come next year, too late for the three victims this weekend, and not soon enough for the other residents of Rocky Ford.
Dispatcher: Steve Departure Time: 09:31 No comments:

D&SNGRR Ridership Down But Evens Up By Cutting Expenses

The Durango & Silverton Narrow Gauge Railroad released that its ridership was down 11% from last season. Pre-emtively, the railroad scaled back operations earlier this year by removing its fourth train from the schedule. The move helped keep their budget on track this year. For more information, view the article from the Durango Herald here.

The D&SNGRR begins its winter schedule later this month on the 26th with runs to Cascade Canyon.
Dispatcher: Steve Departure Time: 16:29 No comments:

Union Pacific and RTD have struck a preliminary deal worth $210 Million for railroad relocation to allow RTDs FasTracks light rail/commuter rail project to proceed after negotiations failed earlier this year. RTD will pay to relocate UP assets to create its planned corridors. The deal specifically mentions the West Corridor, the Gold Line, the North Metro Line and the East Corridor from Union Station out to Pena Boulevard. RTD acquires UPs Boulder Industrial Lead from Denver to Boulder.

The differences were resolved. The projects moved foward. And there was much rejoicing.
Dispatcher: Steve Departure Time: 22:34 No comments:

Having Galloping Goose For Thanksgiving

More details regarding the museum's flock of 3

Note: it was previously listed that only Geese 6 and 7 were operating, but Mr. Tallman says all three will be running.
Dispatcher: Steve Departure Time: 13:36 No comments:

Train Show in Denver This Weekend

There's a big train show in Denver this weekend. The Great Train Expo returns to the National Western Complex this Saturday and Sunday, November 8th and 9th. Doors open from 10 a.m. to 4 p.m. Adults are $7 and kids 12 and under are free. Admission is good for both days.
Dispatcher: Steve Departure Time: 16:58 No comments:

The Amtrak improvement bill (Railroad Safety Enhancement Act of 2008) signed into law this week by President Bush contains instructions for Amtrak to look for additional service options out of Denver Union Station. This is a tremendous boost for commuter service options, even if it doesn't result in corridor service via Amtrak like Chicago's Illinois Service. It could simply bring back the long-dead Pioneer service from Denver to Seattle, expanding rail service for residents of the northern Rocky Mountain states currently served by only the Empire Builder. If it does, mandated improvements to trackage would serve Amtrak and any other commuter service that starts up over the same route.

More details will emerge in the future, but also in the bill is $18 Million to build an underground rail transit safety test center at the Pueblo DOT railroad facility. The text specifically says,

There are authorized to be appropriated to the Secretary $18,000,000 for the period encompassing fiscal years 2008 through 2011 to design, develop, and construct the Facility for Underground Rail Station and Tunnel at the Transportation Technology Center in Pueblo, Colorado. The facility shall be used to test and evaluate the vulnerabilities of above-ground and underground rail tunnels to prevent accidents and incidents in such tunnels, to mitigate and remediate the consequences of any such accidents or incidents, and to provide a realistic scenario for training emergency responders.

This is a minor boon for Pueblo, especially in light of the financial meltdown currently taking hold on Wall Street.

I'm going to keep searching this legislation to see what else made it, but this is a great help to the Rocky Mountain Rail Authority.
Dispatcher: Steve Departure Time: 12:21 No comments:

I have updated the Colorado Railroads Special Events Calendar to include the Christmas trains slated to run this season. The Colorado Railroad Museum, the Cumbres & Toltec Scenic, the Rio Grande Scenic, the Manitou & Pikes Peak, and the Durango & Silverton all plan to run trains this year. Only C&TS's Cinder Bear train is scheduled to run during the day.

If you have kids ages 3 to 10, I'm sure they'll get a kick out of riding a Christmas train. Prices are much reduced from the regular season fares with many running at $10 per child and $20 per adult. Hear the sleigh bells yet? You will.
Dispatcher: Steve Departure Time: 18:06 No comments:

The Ridgway of the days of Otto Mears is long gone, but local historians are getting down to doing some serious archeological work. Catch up with them in Original Ridgway Grew Up As A Railroad Town. If you're in the area, the museum is a must-see for anyone interested in railroads, history, or just the beauty and grandeur of the San Juan Range.
Dispatcher: Steve Departure Time: 13:01 No comments:

If you want to know exactly what is going on with Union Station these days and what's on the agenda for its "coming soon" redevelopment as the transportation hub for metro Denver, Westword has a 7 page article (print version) that serves as an interesting read, at least for a Sunday afternoon. With no "artist concept" drawings, it's hard for me to envision it. Honestly, I just hope they fix the ceiling soon.
Dispatcher: Steve Departure Time: 12:54 No comments:

Morgan Captures UP Special On the Moffat

Kevin Morgan caught some great photos of the UP Board of Directors special on the Moffat Route. The Rio Grande Heritage unit 1989 and the C&NW Heritage unit 1995 provided the motive power. As usual, he got some great shots! He also managed to capture a rarity, an Amtrak California F59PH on the California Zephyr eastbound. Eastbounds in the afternoon are hard to catch with the right light, but Kevin's all pro. 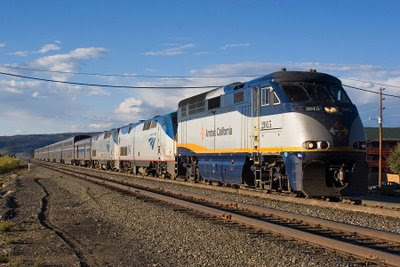 Emo Phillips once said that some days it's just not worth chewing through the leather straps. I'm sure he was thinking of this guy. While the first incident--finding himself the victim of a hit-and-run--might not have been his fault, the second--getting run off a railroad bridge by a passing train--would definitely find him culpable.

Just another case of trying to beat the train and losing. Hope this guy has better luck in the future.
Dispatcher: Steve Departure Time: 01:12 No comments:

Way back before Denver's suburbs ever thought of going past Northglenn and Thornton, folks on the northern part of the Front Range were treated to a rare sight: a 2-10-0 Decapod steam engine operating over the Great Western Railway. Today, #90 is the newest and strongest in the stable at the Strasburg Railroad in Pennsylvania. (Read the article)
Dispatcher: Steve Departure Time: 17:32 No comments: