The Royal Gorge fire burns near Canon City. Some tourist structures within Royal Gorge Bridge park have burned, but the bridge remains intact as of late Tuesday. The miniature railroad that runs inside the park appears to have suffered some damage. No deaths or serious injuries have been reported.

There is no word at this time regarding the status or operations of the Royal Gorge Route railroad Tuesday or what is planned for Wednesday. The railroad has operated for nearly 15 years carrying passengers from Canon City to Parkdale, Colorado along the bottom of the Royal Gorge next to the Arkansas River, ever since the Union Pacific shuttered the Tennessee Pass route between Pueblo and Dotsero. The tracks are located on the north side of the canyon, across the river from where the fire started. Given the depth of the gorge and the steepness of the walls, combustible trees and other vegetation are more sparse than above, but could still cause damage to the rails. It's assumed that until the fire is controlled and contained, the railroad will likely not be allowed to run any trains through the gorge.

Another fire burning north of Colorado Springs ignited almost the same time Tuesday afternoon as the Royal Gorge fire. The Black Forest fire has claimed many homes and displaced hundreds of families with mandatory evacuations. The fire is also uncontrolled and 0% contained. Prevailing winds pushing it east in the direction of the former Chicago Rock Island & Pacific town of Peyton.◊

New Reader Poll: How To Improve the Colorado Railroad Museum?

Near the top of the other column on www.corailroads.com, there's a new reader poll with a few ideas about the Colorado Railroad Museum and, in terms of mega-projects, I ask you, "What could possibly improve the place?" Some of these ideas are a little "out there" and some are practical. Cast your vote for two or three you like. Keep watching, as the poll will go for more than 6 months. 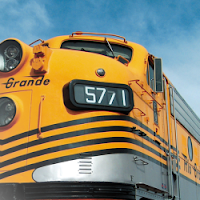 Have I left out anything? Comment in with your ideas. If the right eyes are watching, who knows what could happen? Besides, I really want to hear about your ideas on this.

For ideas and thoughts, try looking through this roster-like photo album on rrpicturearchives.net.◊

Denver's RTD, the mass transit for the Colorado capital's 7 counties, recently opened the West Line, a light rail line 12.1 miles long serving the west Denver suburbs as far as the Jefferson County "Taj Mahal" government center in Golden. It resurrected the rapid transit line that ran along 13th Avenue built over a century ago. This is the first line of the long term Fastracks plan to be completed. RTD deserves its fair share of congratulations. Not only did they deliver the first portion on time, but their contractors also contributed to the community through the project. Unfortunately, a public organization like RTD is not immune to mistakes.

As part of the effort to smooth the changes a newly active light rail line will inevitably cause, a safety video was created, with animation and voice-overs aimed specifically at children. The video is titled "Safe Routes To School

A specially designed mascot named Fastracks Freddy tells the kids about light rail. It's a tame, paced affair that leaves the conscious mind with little more than the basic rules of keeping oneself out of harm's way.

However, at roughly 1:59 into the video, a plainly visible F-bomb is displayed on the backpack of a person walking away from the camera. It's hard to imagine that with such care taken to educate the kids, something that plain could make it past the production team. If they had pixelated the text or removed the shot, no one would have noticed. The video hosted by YouTube had been viewed over 500 times.

The 5 1/2 minute safety video was produced by the City of Lakewood and KLTV8 T using funds from the Safe Routes to School program.

Scott Reed, a spokesman for RTD, was not aware of the video Monday afternoon, but later contacted Colorado Railroads, saying, "We contacted KLTV8 television in Lakewood, who produced the video and posted it on YouTube through their website.  They are pulling down the video tonight and will edit it appropriately."◊

Here's a nifty little commercial that GE put together. You'd never think that they were selling locomotives. Suddenly, I have a craving for freshly juiced diesels.

Anyone else notice the nod the ad gives to railfans?

If you're a fan of the 80s show Knight Rider, you're in for a big treat as well. The 80's dreamed of a talking car. 30 years later, GE touts a talking train.


Again, EMD, where are you? Where's your ACe in the whole?◊

Blessed Are the Patient

Do my eyes deceive me? Can it be? Is this really happening? Yes! Yes! YES!!!

Denver & Rio Grande Western's famed mikado, Mudhen 463, is under steam and testing! That is not a misprint. According to Nathan Holmes, webmaster at DRGW.net,


...not only does it steam, but it actually runs. They did a shakedown run with her today (4/9) from Antonito out to Lava and back.

He linked to the Friends of the C&TS discussion board post by Rich Murray with two pictures by Craig McMullen.

Tim Tennant posted details today on the delayed, canceled, on-again, off-again-now-on-again charter that finally seems to be coming true. The release also has a picture of the engineunder steam at Lava.  The engine is sans number, but I can tell it's the real deal with a lot of shiny new parts. Make plans to visit the Cumbres & Toltec Scenic Railroad this summer to catch the oldest and smallest of the surviving steam engines of the Rio Grande!

Thanks to valued reader Rich Guggenheim for the tip.◊


"Any tool that we can use to save lives is a welcome addition to our transportation tool kit," said CDOT Statewide Utilities Engineer Mat Flores. "The flashing lights disrupt a driver's expectations and should draw his or her attention to the crossing, resulting in a significant safety benefit."

CTC, Inc., based in Fort Worth, Texas, provides communication and signaling systems, products and services for the highway and rail, specializing in highway-rail grade crossings that are interconnected with traffic signals.

LED-lit signs do make it harder for drivers to ignore them, but I wonder whether this is just another sign (ha!) that our society is suffering from "warning fatigue."◊

I happened across this video some time ago and, unlike some web videos, this one seems to improve over time. I've watched it several times and I have to say it's one of my favorites.

Normally, I don't feature videos that have disabled embedding. I believe sharing is something that helps your public exposure if it's done with a watermark or title cards showing whose content it is. On the other hand, this video is just too good to pass up. 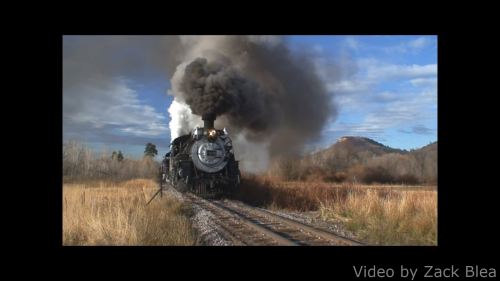 Former Rio Grande Mikado locomotives, numbers 489, 488, and 487, in that order, triple-head a photo freight over Cumbres Pass in the snow. The footage is HD, sharp focus and set up extremely well. Low angle passes with a wide lens and high angle shots work together like a cinematographer's dream. It should be on a DVD somewhere, but Zack Blea, God bless 'im, has put it on the web for us all to enjoy!

(Next time, Zack, please let me show the readers your awesomeness here!)◊

Classic lines of the track, ballast, locomotive roof line, and telegraph lines make for a classy perspective photo, but the kicker is the awesome Grande Gold coloring on the lead unit, an SD40T-2, with all the beauty (and grime) of Rio Grande's railroading on the western slope of the Centennial State. On a side note, I appreciate that Mr. Schwesinger took extensive notes when taking the photos or shortly thereafter, enabling him to write his own caption (saving me the trouble).◊

POTD - A Marred Subject Shown In a Positive Light

When Amtrak rebranded itself from the pointless arrow to the current logo, I could imagine a lot of folks trying to understand the cryptic three stripes. The creative use of negative space is a little symbolic of the way Amtrak has survived for 40+ years now. People keep trying to kill it, only to find  their actions could create a gap in the country's transportation network that would be untenable. ◊


Since it's retirement in 2008, Rio Grande SD40T-2 #5371, the only Rio Grande diesel to retire without being re-numbered or sold off, has been joined at the old loco's home by SD40T-2 #5401, which saw brief service as patched Union Pacific 9871. Though they haven't relocated the engine to the property, it's good to know that such vital pieces of contemporary railroading is going to survive in the both of the states the Rio Grande called home.◊

The days are slowly getting longer and the mid-winter doldrums are nearing. Are you looking to get the creative juices flowing? Inspiration may be as close as your nearest museum. While some museums board up for the winter, the colder months still tend to be slower at the others, making for staff with the time and ability to direct you where your interests might dictate.

For model railroaders, the connection is obvious. Painters and photographers can develop a great deal of closeup work with the various textures and flavors. Historians can definitely find a new project or two. Volunteers could do with an application for work and then an application of their skills. Sometimes any unrelated field might benefit from time spent there. You just never know where lightning will strike.

Here's a short list (and a map) of year-round museums you can try:

or take it with you on your phone!

On this inaugural week, a lot of folks might wonder what the future holds. Personally, I feel that Optimism and Obama are two words that begin with O, have an M in the middle, and that's where the similarities end. On the other hand, as an unpaid outsider with a somewhat obsessive interest, if I were to look into the future of railroading in the USA, particularly the west, I'd say that: