The Grinch showed up right on time. Now, the Ski Train's 70th season is very much in doubt. Trains will not run until at least January 6th, and even that is highly unlikely. 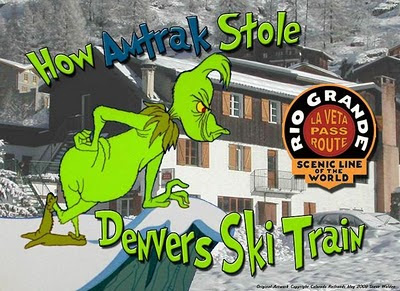 Power for Rio Grande Scenic Railroad has been sighted near Denver's Union Station in preparation for the Ski Train.

According to KKTV 11 News, a private tour bus belonging to the Canadian rap group Swollen Members was smashed by an oncoming freight train last night as it was stuck on the tracks.
Continue Reading
Dispatcher: Steve Departure Time: 03:41 No comments:

It's hard for anyone to take a name like Buffie McFadyen seriously, but since she's a State Representative, Colorado Governor Bill Ritter had to take her seriously when she asked him to pressure Union Pacific to reopen the Tennessee Pass line.
Continue Reading
Dispatcher: Steve Departure Time: 02:47 2 comments:

As reported last week, there was a bit of spectacular derailment on the Moffat line right over Colorado Highway 72, dropping a hopper onto the roadway below and spilling several cars down the embankment toward the CDOT depot.

As the digital age progresses, we'll see more and more digital media used to bring us glimpses of Colorado's railroading past. Of particular interest to a lot of railfans are the operations along the narrow gauge circle.
Continue Reading
Dispatcher: Steve Departure Time: 12:39 1 comment:

Derailments are as old as railroading and minor incidents seldom are newsworthy. There is the exception, and this certainly qualifies. An empty freight train derailed 8 cars while crossing the overpass of Colorado Highway 72 at the entrance to Coal Creek Canyon in Jefferson County, dropping a hopper car onto the highway below. No injuries on the train or highway were reported.

a long absence, Kevin Morgan and his Colorado Railfan site have returned with new content! His coverage of the UP 1989 Rio Grande Heritage Unit heading up the snow bus west of Denver is the first of 9 planned photo essays soon to appear on his site.
Dispatcher: Steve Departure Time: 12:53 No comments:

The Streetcar In The Basement

History sometimes shows up in the oddest places. A couple who bought a new home built on an old foundation recently discovered that they had a streetcar in their basement.

It's always been on RTD's to-do list to extend the Southwest light rail extension, currently running from Broadway and Mississippi to Santa Fe and Mineral. Exactly how far and where has been a question ever since they built the original extension in 1999. Now we know.

The main expense will be a flyover taking the light rail line over all 4-6 lanes of C-470 onto the south side of the highway. This would be a separate flyover from the CDOT-planned flyover running the same way from southbound Santa Fe to eastbound C-470, eliminating a nasty left-hand turn that has run at capacity or over capacity ever since the interchange was constructed. The CDOT flyover would go over the highway, over/under the BNSF/UP Joint Line bridges and under the RTD flyover.

All this lacing with concrete will work to eat up the funds of FasTracks, which already is in trouble because of the lost revenues because of the financial depression. Nevermind that one of the two planned stations isn't accounted for in the FasTracks plan. This is not good.

Despite the cost, RTD and Denver need this extension. It will relieve the pressure at the Mineral station, which is currently the southern terminus. Additionally, it will establish a direct link with C-470 at one/two interchanges, which will lure commuters coming in from Ken Caryl, Kipling, and Wadsworth from the west. Finally, it links the Highlands Ranch neighborhood directly to the Light Rail system, which should be a deep mine for RTD to draw from for decades to come. Sometimes a tree only needs to cross a few inches of clay to reach the aquifer for explosive growth. If RTD can cross the belt highway, they may do the same thing.

More on Kevin Flynn's Inside Lane

Could Boulder support a dinner train?

That's the question I find myself asking as I contemplate this announcement by RTD covered in the Denver Post. RTD is hoping to lease the remaining trackage and right-of-way left over from the purchase of a former UP line for FasTracks. The agency volunteering to take up this lease is the Boulder County Railway Historical Society, which of late, lost it's web site, www.boulderrail.org. They do have rolling stock, mostly freight and in various states of repair. Would such an agency be able to handle the demand? Would instead the folks at the Royal Gorge or the Rio Grande & San Luis be more qualified and better equipped? A lot of gears are turning. Let's hope something good and railworthy results!
Dispatcher: Steve Departure Time: 02:48 1 comment: