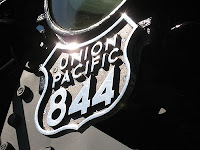 As I write this, Union Pacific 844, the FEF-3 that never retired, sits at the top of the world ...well, the top of the Palmer Divide, anyway. It is as high in elevation that it will get along the entire goodwill tour, edging out Altamont, Wyoming by only 7 feet in elevation, according to UP elevation measurements.

This is one of the first tours of 844 without Steve Lee at the throttle, both literally and figuratively. Lee retired last year after building the UP Steam program into a major tool in the railroad's Public Relations bucket. On time performances and a reliable stable of locomotives were a hallmark of Lee's operational program. The pressure is now on Lee's successor to continue and, if possible, improve on his legacy.

Hearing that low, steamboat-like whistle is a thrill for the first time or just the most recent time, it's a rush for the serious railfan and the casual observer alike. With the second decade of the 21st century well underway, it's important to remember that, with the 844 itself nearing 70 years of service, we are fast losing the last generation that saw the widespread use of steam locomotives and the diesel "revolution" that followed. Many pundits believed that railfanning would soon die off with the loss of steam. Instead, it changed. What railfanning lost in visual drama of a smoke plume and drivers churning away, it gained in the newly found specialty of steam excursions and vintage operations that could not or would not dieselize. UP has found that using the 844 and stable-mate 3985 boosts not only its corporate image, but the generations of railfans that have since grown up never having seen charging column of smoke (Alcos excepted) or having heard a steam whistle echo through their town. It's a thrill few will forget, and for thousands of people along Colorado's Front Range, Union Pacific Steam is king for a day.