The news out of Chama is not good.
On Thursday, June 24th, the Lobato Trestle on the Cumbres & Toltec Scenic Railroad burned, raining flaming timbers from its steel frame onto the underbrush and evergreens below, charring 2 acres before being extinguished. That Saturday, structural engineers from HNTB in St. Louis did an emergency assessment of the trestle, and produced a preliminary report by July 1st. 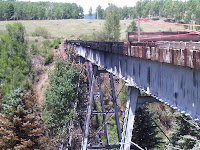 In the report, HNTB concluded that Lobato trestle is not able to support traffic, and the report recommends complete replacement of the span. Had it been a simple patch up with some steel reinforcements and then the wood and rails, it would have been a matter of weeks. Complete replacement not only cripples this year's season, but, even with insurance, the replacement expense is going to be one tough sum to come up with. The deductible is $50,000, and the coverage is only to $360,000, "likely insufficient to cover the cost of a total replacement," according to Friends of the C&TS president, Tim Tennant. Still, C&TS Management is not entirely sure total replacement is their only option.

“They said that the most prudent course of action would be to replace the entire thing, but we are still exploring less extreme alternatives,” Elmer Salazar, president and CEO of the C&TS Management Corp, said. “It is not yet clear whether this recommendation is based on damage from the fire, or from the general condition and design of this almost century-old structure.”

Ouch. Regardless of how much they raise and how quickly they do, a total replacement means that their main terminal in Chama, NM, will only do short, 4-mile trips up to Lobato and back for 2010, doing very little in business comparatively. Antonito would fare a little better, being the only terminal able to reach the midpoint of Osier and return. Obviously, management would like to get back to normal operations within this season, but is that even possible?

“We would prefer the quicker solution of replacing the roadbed on the existing steel trestle framework, as that approach would take a vastly shorter time to complete repairs,” Salazar said. “However, the long-term safety and adequacy of the trestle is the primary concern -- and if those considerations dictate a necessity to replace the whole thing, we will do it.” 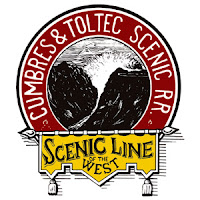 In the meantime, the Cumbres & Toltec Scenic is putting an emphasis on the creative short runs in Chama, such as the Cinder Bear train and the "hold up" robbery train. Such an emphasis is all that can be done in light of the current predicament. Just like the route up from Chama, this is a 4% climb with lots of twists and turns. Keep shoveling coal, and pray your steam holds steady!
Dispatcher: Steve Departure Time: 23:00