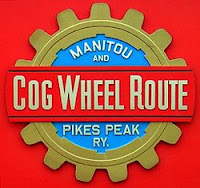 Using a Abt rack system to climb the mountain in a fraction of the time and distance it would take a regular adhesion locomotive and cars, the railroad first began carrying passengers to the top in 1891. The cog railway saved so much time it was possible for any tourist to make the excursion to the top a day trip, turning it into the first-rate tourism attraction it is today.
Maintaining and operating a rack system makes for some interesting workings, interesting enough for Trains Magazine to use their fledgling TrainsTube service to show their subscribers and the world how the Cog Wheel Route actually works, starting with a view from between the rails at how the cog mates with the track. The video also shows one of the most curious workings: how the switching works when you have a rack in the middle that must synch up with the teeth that it connects to. It's worth the time to take a look at this Swiss and American technology that continues to prosper on Pikes Peak 120 years later.
Dispatcher: Steve Departure Time: 13:01