Love him or hate him, Donald Shank has fought all he could to bring a train from the San Luis Valley into Creede on the rails of the former Denver & Rio Grande Western. Now, finding himself sliding from a pitched legal battle into a ravine as steep and deep as the canyons of the Creede river, Shank has quit and says that he will begin salvage operations to pull the rails up within Creede city limits.

Our historical foundation, whose mission it is to preserve Colorado’s rich railroad history, is charged with the dismal task of removing what was so difficult to bring to Creede ... the rails that built the town. ... And so it will be with a profound sense of loss that I will pull the first spike, unbolt the first track bolt and lift the first rail ... The biggest loss will be to history.

The impact of this announcement is yet to be felt. Of particular concern is this month's scheduled trip over the Creede branch by the Rocky Mountain division of NARCOA (North American RailCar Operators Association is a group of track speeder afficianados, a railfan sub-species).

Opinion
What is truly disappointing is that this comes in the face of the apparent success of the Rio Grande Scenic Railroad operating out of Alamosa in the heart of the San Luis Valley. On the other hand, every cloud over Creede has a silver lining. Depending on a lot, there is the off chance that a deal could be struck in the future for the RGSR to operate or purchase part of the line between South Fork and--just outside of--Creede. Plenty of mountain scenery awaits those travelling to the stomping grounds of Soapy Smith, and a standard-gauge steam engine already operating nearby could do the pulling. Who knows what the future brings, but some residents of Creede will fight it tooth and nail, to Donald Shank's dismay.
Dispatcher: Steve Departure Time: 14:16 No comments: 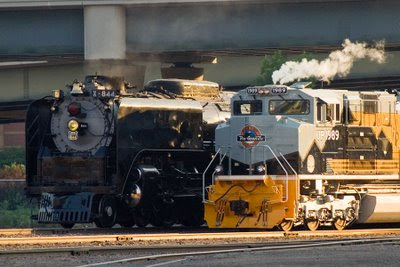